What it Was Like to Work for Dr. Coburn

I have worked for Dr. Coburn for eight of the last ten years. There was never a time where I entered into a policy discussion with him where I didn’t get an adrenaline rush. Not because he was intimidating (though he definitely was at first). Not because he was abrasive or condescending (maybe blunt, but he always treated everyone with respect).

The nerves were firing because anytime you went into a policy discussion with Dr. Coburn – you were about to go through a grueling test. You had to know your stuff – because he either already knew the subject better than you or could quickly pick it up and spot the weaknesses of your case immediately.

You did not get a second chance to restate your position. You had to have a rock-solid argument ready to go. If it’s a thin case, he would shred it in five seconds and tell you to go back and do your work. These back-and-forths rarely lasted longer than five minutes. Most were over in less than two.

He was demanding to be sure. But the pay-off was worth it. Because once you passed the test, Dr. Coburn would go to the mat for that position. So, he wanted to know more about an issue than anyone in the room – especially the sponsors of a bill that he was blocking. Frustratingly, he would also improve your argument in ways that you – the supposed policy specialist – hadn’t even thought of.

Dr. Coburn was brilliant. To keep himself sharp, Dr. Coburn would always carry a notecard in his suit pocket with a litany of different facts and figures to review throughout the day. He also had an absurd work ethic. He was constantly working through detailed briefing memos or reading and approving the responses to every person that wrote in from Oklahoma (a feat that I still don’t understand how he kept up with). We also had to cite everything in our reports so he could look up the sources himself (I helped write a 200-page report on congressional mismanagement of the National Park Service that contained over 700 footnotes).

There was never a subject that he would stray away from. It did not matter if the policy was a tweak to an obscure program that would save thousands of dollars or a transformative change that would impact billions of dollars or millions of people. And he would always approach them with the same level of preparation and conviction.

The last week of his Senate career exemplified the range and quantity of his legislating. Dr. Coburn fought a public land expansion on a Defense Authorization bill, killed a major insurance program over a negotiation breakdown, engaged in a Senate rules battle, and released a major oversight report on the Department of Homeland Security. Oh, he also delivered an iconic farewell speech and was dealing with the pain and exhaustion of his battle with cancer.

Our team was able to accomplish so much because he placed a lot of trust in our work. It did not matter which members, donors, or “DC insiders” from either party a stance would offend. I don’t even recall a time when he asked where they stood. Nor did it matter if a position caused a media fury storm to rain down upon the office, as principles-based legislating can often do.

Once he was in the fight, he would see it through until the end. I can’t even begin to fathom how much heat he personally took on for our work. But he never complained about it once.

That is why working for Dr. Coburn was the most rewarding experience.

Dr. Coburn had a set of unwavering principles that we all took to heart and a set of tactics and strategies that were used to advance them. That gave us a clear purpose. A pursuit of furthering a mission that was bigger than ourselves. We never had to worry about catering to the typical norms of DC politics.

We blocked a lot of bills. We offered a lot of amendments. We lost a lot of votes. We highlighted a lot of wasteful spending. We irked a lot of people. And over time, we started changing how business was done. Bills that added new spending could not pass without offsets. Program duplication became part of the lexicon. The practice of earmarking went away. People started paying attention to government waste.

Our fights were not always lonely ones either. Dr. Coburn created a lot of unexpected alliances. He worked with Senator Feinstein to eliminate an expensive ethanol tax credit. With Senator Durbin on cutting subsidies for wealthy farmers. And most famously, with then-Senator Obama on a government transparency bill that initiated USAspending.com. These are just a few of the numerous partnerships he formed.

The scope of his work. The attention to details. Always entering a battle with an end-game. This all led to a prolific body of work that cannot be matched by members that served decades longer than him.

It was fun to be a part of his team. We were damn proud of our work. Still are.

But, above all, working for Dr. Coburn provided the ultimate learning experience. Not about public policy. Senate procedure. The national debt. Or even the constitution. Though I certainly learned a lot about each of them.

Rather, I learned the importance of seeking the truth and doing what’s right. About knowing where your priorities lie and sticking faithfully to your principles. About how you can disagree with someone and still show love and respect. In return, you are likely to receive the same.

None of these things are easy to do. Otherwise, there would be a lot more Tom Coburns.

That’s why setting Dr. Coburn as your role model is a recipe for failure. He possessed too many admirable traits and excelled at an impossibly high level. The bar he set is nearly impossible to reach.

But I’m going to do it anyways. Because I learned from Dr. Coburn to never be afraid of losing. Because if you are fighting the good fight, for the right reasons, you are bound to eventually prevail. 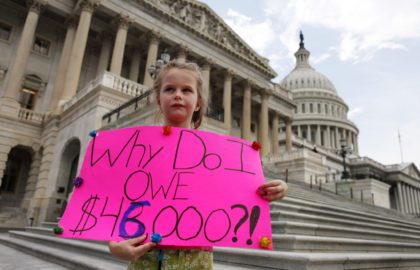 Economic Growth Should Be Earned, Not Stolen