Yesterday, President Trump submitted a $15.4 billion rescission request to Congress.  What does that even mean and will it work?  Read on to find out.

What is a rescission anyway?

A rescission is the permanent cancellation of budget authority.

Wait, what is budget authority?

Broadly speaking, when Congress passes an appropriations bill, they authorize budget authority in specific amounts for certain programs for a period of time (sometimes forever). Once the executive branch agency makes a binding commitment such as signing a contract or hiring a worker, that budget authority is considered obligated, though not yet spent. The term for money actually spent is an outlay.  Unobligated balances are any budget authority that has been provided by Congress but has not been committed.

How much unobligated balances does the federal government have?

Entering 2018, the federal government has $1 trillion in unobligated balances.

Former Senator Coburn put out an entire report on unused dollars, called “Money for Nothing.” The report highlighted more than $70 billion in federal funds left unspent years after being appropriated by Congress due to poorly drafted laws, bureaucratic obstacles and mismanagement, and a general lack of interest or demand from the communities to which this money was allocated.

Okay, so a rescission takes money back from the executive branch?

Sort of. More accurately, it takes away the budget authority to enter into contracts to spend money.  Though a lot of the rescissions come from budget authority that has already expired or was not planning on being used.

Why does Trump need Congress’s permission? Can’t he just tell agencies to just not spend the money?

The rescission process originates from the Congressional Budget and Impoundment Control Act of 1974, which was a major budget reform that resulted from a clash between President Nixon and Congress. President Nixon was refusing to spend money that Congress was appropriating, even eliminating entire programs against Congress’s explicit wishes. Article I of the Constitution states that “no money shall be drawn from the Treasury but in consequence of appropriations made by law” and Article II stipulates that the President “shall take care that the laws be faithfully executed.”

Nixon’s actions to withhold or delay the expenditure of funds (known as impounding) created a constitutional power predicament, and the 1974 law gave Congress a firmer grip on the federal purse strings.

How does the rescission process actually work?

The 1974 law requires that the President submit a rescission proposal to Congress listing the amounts of budget authority to be rescinded, where it comes from, projects and functions affected, why it should be rescinded, and the impacts of the rescissions.  Once the rescission proposal is made, Congress has 45-days of “continuous session” to act on the proposal. The “continuous session” stipulation means if Congress goes into recess for longer than 3 days – those days will not be counted against the 45 day clock.  Congress can change the amounts and programs where the rescissions come from. Importantly for the current political makeup of Congress – rescissions approvals only require a simple majority approval by the Senate rather than the usual 60 votes needed to overcome a minority filibuster – though this element is not set in stone and will likely be challenged by Senate Democrats. The ultimate ruling would come down to the ruling of the Senate parliamentarian.

Got it, so what is in Trump’s rescission request?

The Trump rescission proposal requests the cancellation of $15.4 billion in budget authority from 38 programs across 14 different agencies. None of the funds up for rescission come from the $1.3 trillion spending blowout that Congress passed in March. The largest proposed rescissions come from the Children Health Insurance Program or CHIP (about $7 billion) and the Advanced Technology Vehicle Manufacturing Loan program ($4.3 billion). For a complete list, you can read the 42 page request here.

If Congress agrees, does that mean the deficit will be reduced by $15.4 billion?

No. Since most of the budget authority being rescinded was not planning on being used or is already expired – they would not be spent anyways.  In total, the Trump administration estimates that about $3 billion will be saved.

Think of it like milk.  Once its expired, you can’t use it.  The Trump administration is proposing to pour it down the drain.  Congress regularly trades in the soured milk for fresh milk. Which sounds great, if you don’t know there is only a limited number of cows to produce the milk (i.e. taxpayers and bond buyers).

Sen. Harris and others that will make the predictable political attack might want to check her own voting record.  She actually voted to rescind $500 million from the Children’s Health Insurance Program (CHIP) in the Fiscal Year 2017 omnibus bill. The bill also included a Changes in Mandatory Spending Provision (CHIMPs)that allowed $11 billion from the Crime Victims Fund to pay for other spending.  By her logic, she used money for poor children and victims of crime to support California salmon and high-speed rail. Politics are fun, right?

Is Congress going to approve the Trump rescissions package?

Sen. Harris’s political attack, much like everything in Washington, is a reason why it may not be approved.  Politico reported that the current mindset of Senate Republicans is that getting a small rescissions package versus being attacked for cutting heath care for poor kids means the “juice isn’t worth the squeeze.”  This is another example of cowardice and a microcosm of why we are in a $21 trillion national debt with no plan to solve our nation’s grave long term fiscal challenges. Political opportunism will always exist in Washington. It takes clear vision and steady leadership to map out our fiscal challenges to the American people and make the case to solve them.

This is another example of cowardice and a microcosm of why we are in a $21 trillion national debt with no plan to solve our nation’s grave long term fiscal challenges.

The House is likely to pass a rescissions bill.  Its fate in the Senate is very much in the air and will be determined by the appropriators that would rather preserve budget authority to spend more next year and whether Leader McConnell wants to go for a mostly symbolic gesture for fiscal responsibility.

Speaking of fiscal responsibility, why did Congress have to increase spending by $300 billion if there are $1 trillion in unobligated balances – including nearly $180 billion sitting in domestic program accounts? Doesn’t that mean Congress was spending too much, not too little? 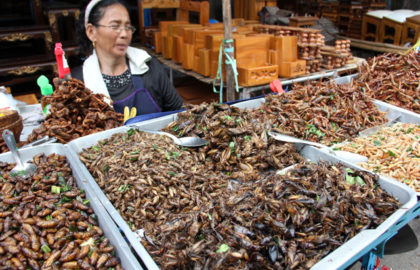 Government Bugs…Not The Kind You Think