Trillion Dollar Deficits as Far as the Analysts Can See

This week’s “Update to the Budget and Economic Outlook: 2019 to 2029” from the Congressional Budget Office (CBO) projected that the federal government will hit the trillion-dollar deficit mark in 2020. Absent changes from Congress, we will never drop below that mark.

Ten years ago, when we crossed that threshold amidst the Great Recession it garnered worries and deficit-reduction action on a bipartisan basis. This time around, the threshold is being crossed amidst a steady economy with record-low-unemployment and it’s the apparent preferred policy of lawmakers.

When President Trump took office, CBO projected that we would hit the trillion-dollar deficit mark in 2022. But leaders in DC put their foot on the accelerator with a tax cut in 2017, followed by a budget blowout in 2018, followed by another budget blowout last month to get us to the ignoble destination two years early. DC got a six-pack in and started taking shots.

The Committee for a Responsible Federal Budget found that policies enacted by Congress since 2015 are responsible for half of the deficits we face over the coming three years and about 35 percent of the deficits over the next decade ($4.5 trillion out of $13.5 trillion). Keen observers will note that the federal deficits were already getting ready to explode, a demographic driven trend predicted for well over a decade.

They are right. Regardless of the actions taken since 2015, the federal budget was already in serious trouble. But instead of working to solve this foreseeable problem, Congress has only made it worse. The recent deal to lift the budget caps not only increased spending by $320 billion over the next two years, it also increased deficit spending by $1.5 trillion over the next 10 years. Congress is doomsday prepping with perishable goods and Alexa. 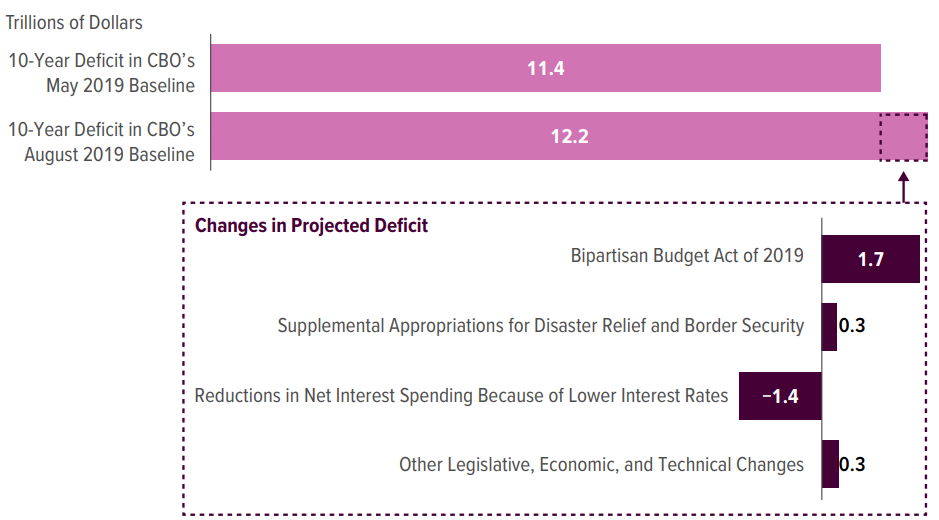 Some prominent economists have preached patience in dealing with our budget woes given our record-low interest rates. They ask, “why cut deficits when we can borrow so cheaply?” The CBO report actually incorporated a substantial downshift in their projected interest rates for the next decade. That change in interest costs yielded a massive $1.3 trillion in savings over the next decade.

Yet, the federal government is still projected to spend $12 trillion more than it takes in over that period, pushing our debt-to-GDP ratio up to 95 percent – its highest level since right after World War II. We are also still expected to spend $5.8 trillion on interest payments over the next 10 years. And if the interest rate does come off of its historic-lows, a one percent change will boost deficits by $1.8 trillion over the decade. This report makes clear that the spend-while-it’s-cheap excuse to ignore deficits (what we have termed Golden Corral Economics) is not just wrong, it’s dangerous.

What’s the biggest take away from this week’s report?

We’ve said this many times before, but we’ll let CBO reiterate the point: “To put debt on a sustainable path, lawmakers will have to make significant changes to tax and spending policies—increasing revenues more than they would under current law, reducing spending below projected amounts, or adopting some combination of those approaches.”

It’s that simple. Congress can delay, but there is no avoiding this eventuality. And if lawmakers duck their responsibility to fix these coming trillion-dollar deficits – it’s the younger Americans that are going to get smacked in the face.