The Department of Defense currently manages a portfolio of 82 weapons systems with an estimated cost of $1.69 trillion. Let’s put that mind-numbing figure into perspective. If a person were to spend $1 million per day, it would take them 4,630 years to deplete their account.

For 17 years, the Government Accountability Office has released an annual assessment regarding these assets—the latest being published earlier this month. To the surprise of most likely nobody, the Department of Defense once again fell short of even the lowest expectations.

Last year, Congress directed the DoD to restructure the Office of the Secretary of Defense. The objective was to develop more advanced and lethal technology that would strengthen the United States fighting force. But in a time where DoD was already suffering from depot dysfunction, acquisition failures in major weapons systems, and a lack of direction, shifting focus away from oversight and towards capability proved to be a major mistake. Authority to enforce responsible execution was now in the hands of the three primary military departments, and this year, GAO found that this change exposed three considerable concerns.

This year, there are four less weapons systems being developed for the military arsenal, but program cost has grown by $8 billion. Overall, total acquisition costs have increased by $569 billion across the portfolio – a whopping 51 percent cost overrun.  Program delivery has also been delayed by an average of 27 months since first estimates.

This is indicative of a consistently broken system.

One of the reasons for cost growth and schedule delay is age. The average age of weapons programs has increased because of DoD opting for additions to current, less effective programs as opposed to replacing them with newer ones. Programs that have been in the portfolio for over 20 years, were the primary cause.

The F-22 fighter jet program, famously dubbed by John McCain as the “most expensive corroding hangar queens in the history of modern military aviation,” exemplified the cold molasses-like process. In 1996, when the program began, the acquisition expectation was 648 aircraft by 2014. In 2002, that number dropped to 381. By 2014, not only did acquisition reform freeze the program at 186 aircraft, Congress approved a new, multi-billion-dollar acquisition process for the F-35— which has been plagued by the same pitfalls and is now one of three new programs that makes up 51 percent of the total acquisition cost increase since first full estimates.

But even newer programs that have been initiated since major acquisition reforms introduced in 2010 are proving to be less effective. For the first time since the reforms went into place, GAO found that post-reform acquisitions are also showing cost growth totaling $1.4 billion – a troubling sign for the future.

67 Percent of all major military contracts were not competed

GAO found that portfolio-wide cost growth has also occurred due to a lack of “full and open competition.” The report found that 67 percent of the 183 major contracts currently associated with the 82 weapons programs were awarded without an open competition. 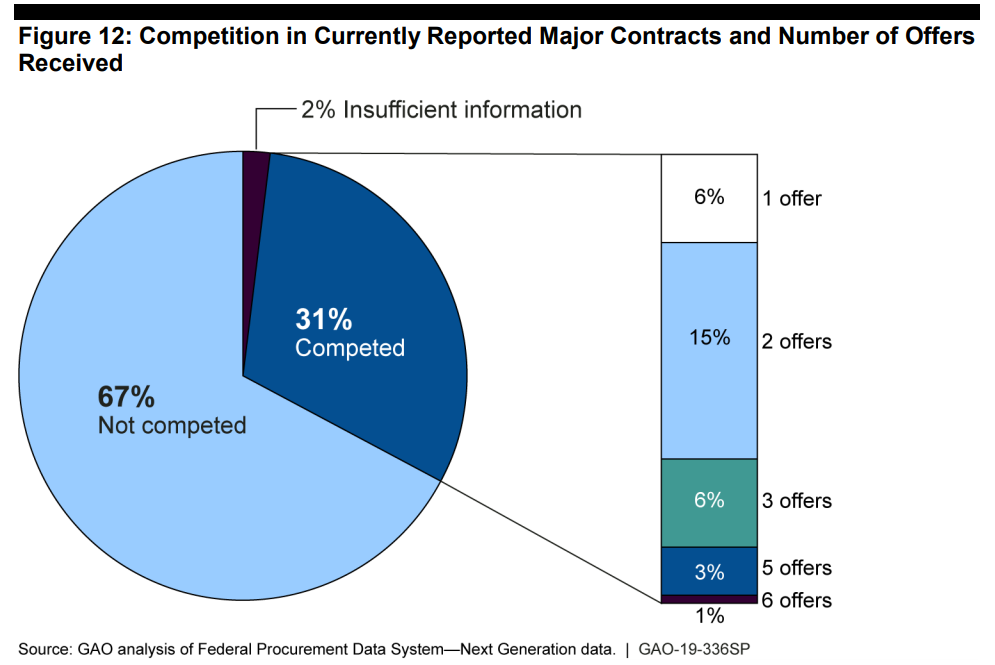 GAO has emphatically stated that “competition is the cornerstone of a sound acquisition process and a critical tool for achieving the best return on investment for taxpayers.” When the Pentagon requests a weapon or vehicle with certain capabilities, and private defense engineering companies compete to create the best design, that produces the requested outcome, for the least amount of money.

Lately, however, contract awards have been given “without full and open competition,” leading to ambivalent companies ignoring deadlines and taking advantage of a government system that so readily forks over additional cash when requested under the guise of “military readiness.”

Five corporations won 72 percent of the dollars associated with the 183 major military contracts, while the other 28 percent was split among 30 companies.

The Boeing Company, which received 13% of the contractual agreements in the 2018 portfolio, boasts the most valuable acquisitions in shear dollar amount. The aviation company netted $95.1 billion in FY 2019, nearly equal to the $99.9 billion split amongst all other military contractors, except the power-5, combined. 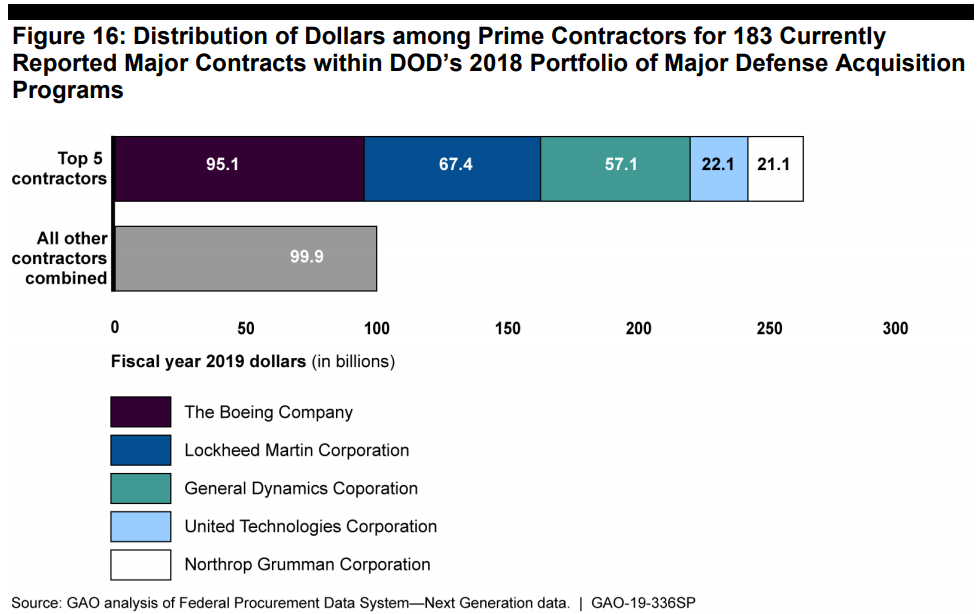 Lockheed Martin won 20% of the available contracts, including a lucrative F-35 agreement in which GAO found they are refusing to supply cost data to the Pentagon when irresponsible practices of their own supply chain management were discovered. This refusal to operate transparently with the government has yet to be met with any repercussions, and the company just signed a 1-year, $63.1 million contract with the Navy last week.

Contractual agreements are not all the fault of DoD. Congressional leaders approve major weapons contracts before they are signed and carried out. For this reason, major defense corporations have funneled millions of dollars into their lobbying efforts. In 2018, the total amount of money spent on lobbying for defense was $125.9 million. The biggest contributors: Lockheed Martin with $27.67 million, and Boeing with $31.86 million – combining for 47.2 percent of the total share in lobbyist dollars.

The massive $1.82 trillion acquisition portfolio is an investment that requires meticulous planning and the utmost care. GAO’s latest report makes clear that the Defense Department has yet to get it right.

A continued mismanagement of cost control and product acquisition, accompanied by a government-established monopoly on defense contract, has led to billions of dollars in waste. Cleaning up the system will require shifting focus from capability back to oversight, without sacrificing military might. A caveat, however, will be that oversight must be in the hands of responsible actors who are free of lobbyist dollars, allowing the acquisition process to be streamlined by incentivizing companies to operate more efficiently and more transparently.

Continuing with the status quo, giving the majority share of contracts to mega-corporations without competition, and allowing them to pressure the decision-makers to do so under the guise of military readiness, will put our country one step closer to complete fiscal disaster. 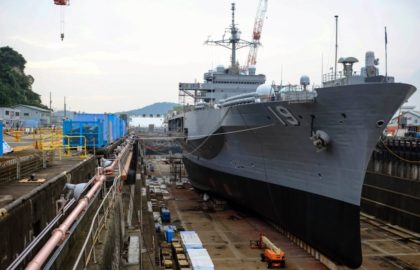