You’ve probably heard the phrase “There ain’t no such thing as a free lunch.” The phrase dates back to when pubs used to entice customers with free lunches in order to get them in the door. Although it turns out those lunches were just unhealthy promotions to get people to pay for more expensive beer.

Over the years, the phrase has turned into a popular adage, warning us that it is impossible to get something for nothing. So why is it when Congress adds to our national debt that we ignore our instincts and consider their spending decisions to have no strings attached?

A common, but ignorant argument is the national debt doesn’t matter because as long as the Treasury can issue securities to finance debt, U.S. assets offset the national debt’s liability or the Federal Reserve can just print it away. Thinking the government is immune to economic consequences just because it can tax and print money is the equivalent to sticking your head in the sand. Instead, the federal government is very much subject to some of the same detriments associated with personal debts.

For example, every time the federal government runs a deficit, it borrows the difference from creditors which include private citizens, businesses, and foreign governments. Similar to how you borrow money from Visa or MasterCard using their credit card services. Creditors in both circumstances get paid interest on their investment, and if you’ve ever been in credit card debt, you know it piles up quickly.

Over the last 78 years, the U.S. government has run a deficit 66 times, issuing debt to creditors at home and abroad. Right now our interest costs are projected to reach $768 billion in 2027 and total $5.2 trillion over the next 10 years. Save for entitlement and benefit programs, the Congressional Budget Office (CBO) projects that interest on our national debt will be the largest budget item in less than a decade. That means in just a few short years, a large chuck of our taxes will be money for nothing.

While no one can foreclose on the federal government, there are consequences when a government borrows more than it can afford. Debt crowds out investment, leads to lower wages, slows economic growth, harms our ability to react to financial crises or adversarial threats, and threatens resources for our most vulnerable. So future generations will be paying for past generation’s excesses with higher taxes and less opportunities.

Like most serious problems in life, they don’t always make themselves immediately present. They build up over time and we become immune to them. Not eating your veggies or exercising puts you at greater risk for diseases that form over time. Not saving for retirement doesn’t affect you until you’re tired and don’t want to work anymore. Ignoring warning signs for too long in any facet of life can have irreparable damage, and the consequences always come home to roost.

Congress has heard the warning signs. Yet, they turn their backs on what government accountants know to be truth, that our fiscal path is unsustainable. Despite this information, Congress recently passed a $1.3 trillion spending bill that greatly exceeds the budget caps set in place in 2011. The leaders of the 2011 budget cap push are the same leaders who decided to blow right by them. Those that voted against the bill did so quietly. It would almost seem like neither party in Congress, no Congressman, no Senator cares about our country’s long term health – that is until election time rolls around.

This is reminiscent of an excerpt from the poem How To Tell A Winner From A Loser, “A winner goes through a problem, a loser makes promises. A winner knows what to fight for and what to compromise on; a loser compromises on what he shouldn’t and fights for what isn’t worthwhile.”

Eventually the chicken will come home to roost. But there is still time to decide which chicken. Will it be financial disaster? Or will it be the eviction of politicians who think you the taxpayer should pay for their free lunch? 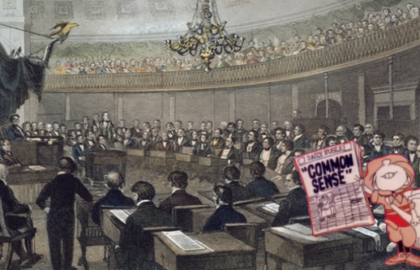