The United States is currently a country that focuses on the present. We think about ourselves, how our decisions affect our lives and those currently around us. While Americans should certainly care about our lives as they are now, our country up until now has been a unique experiment. An experiment that has traditionally focused on future generations, the well being of our children, and their children. A country that puts its future before its present.

100 days is traditionally the marker, heavily touted by the media, to determine the success or failure of an incoming President. There have been countless articles this week about the first 100 days. There is even a show dedicated to it. Heck, we at Restore Accountability wrote an ‘Inauguration Series’ dedicated to what we thought could happen in the first 100 days. In short, we are fascinated by arbitrary benchmarks in order to determine the progress of our nation.

Clearly, the public should hold our leaders accountable. But the problem with the “100 days” culture in Washington is that all the emphasis is placed on short-term accomplishments rather than looking how to shape the future. When we put more emphasis on the last 100 days than we do on upcoming decades, we ignore the massive debts and unfunded entitlement obligations that will make it difficult for future generations to succeed.

It seems unlikely that our representatives will proactively act to fix our country’s biggest challenges. For example, entitlement reform should be the most pressing issue in Congress, but rather than fixing entitlements proactively, Congress is content with letting them blaze towards insolvency. Thoughtful reforms will not be considered, and instead, Congress will kick the can down the road for the next generation to solve.

You probably learned early on that every ACTION has an equal and opposite REACTION. That works for politics too. If our country spends more than we take in, we accumulate debt, and, just like a pyramid scheme, some generation will eventually be stuck with the bill.

Every spending bill or tax cut that increases our country’s debt has a direct impact on future generations. Americans not even born yet! Yet Congress spends and spends thinking little about the future generations who will have to pay for their excesses. 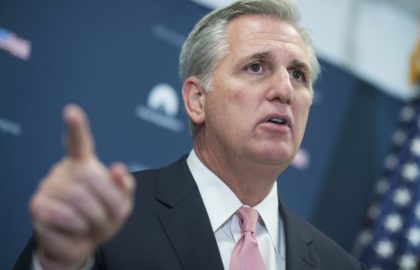 Another Round of Deficit Blame Games