The Federal Government’s Yellow Pages Are a Mess

Can you tell the difference between an office building and a water tower?

If so, you’re one step ahead of the federal government! 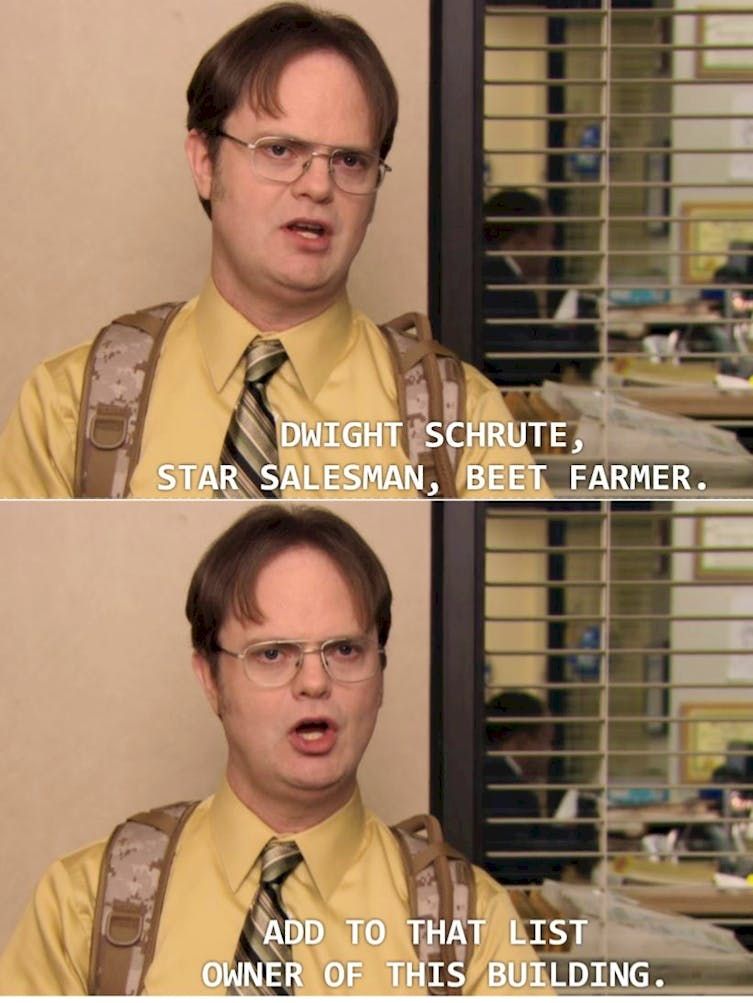 It also does this job poorly. The federal government spends $1.67 billion per year on under-occupied or vacant buildings. Real property management has been on the Government Accountability Office’s (GAO) High Risk List since 2003.

A big part of the problem is that there is not a reliable source of publicly available data on federal real estate that people can use to find leasing and purchasing opportunities.

In 2017, Congress passed a bill that, in part, required the federal government to make its real property database available to the public in a “a single, comprehensive, descriptive database.”

Basically the federal government’s version of the yellow pages.

Making info on federal real estate publicly available will help provide transparency and accountability to the agencies while increasing the opportunity for better use of those unused or underutilized buildings. 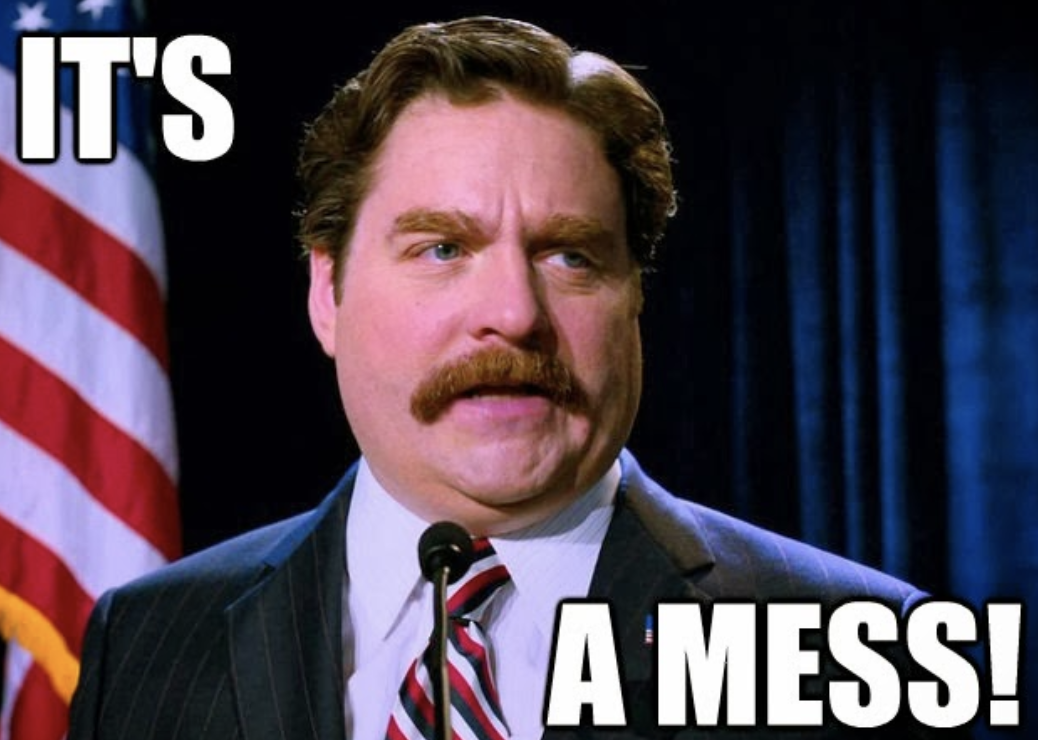 GAO analyzed the info and found comical levels of problems. Only one out of every three properties included all of the necessary information…stuff like properly formatted street addresses.

In one instance, GAO found 215 buildings at the Goddard Space Flight Center were listed as the same address – “Greenbelt Road.” GAO points out that this road stretches over six miles and a GPS search would plop you at the midpoint – over a mile away from the public entrance.

The properties are supposed to include geo-coordinates for each location out to four decimal places. Half of the properties did not meet this criteria. Moreover, it appears that many agencies submitting the information filled out incorrect information just to complete the entry field. That’s likely the case, as only 550 properties of the 305,000 in the database had their geo-coordinates match the street address.

To ensure that the property information is correct, the General Services Administration (GSA) – the agency in charge of the federal government real property management – will flag any anomalies (entries that may be erroneous or incomplete) such as unusually small square footage buildings being listed as an office building. This has apparently not been effective. Filed under things you just can’t make up…GAO found instances where water towers and antennas were listed and verified as office buildings! 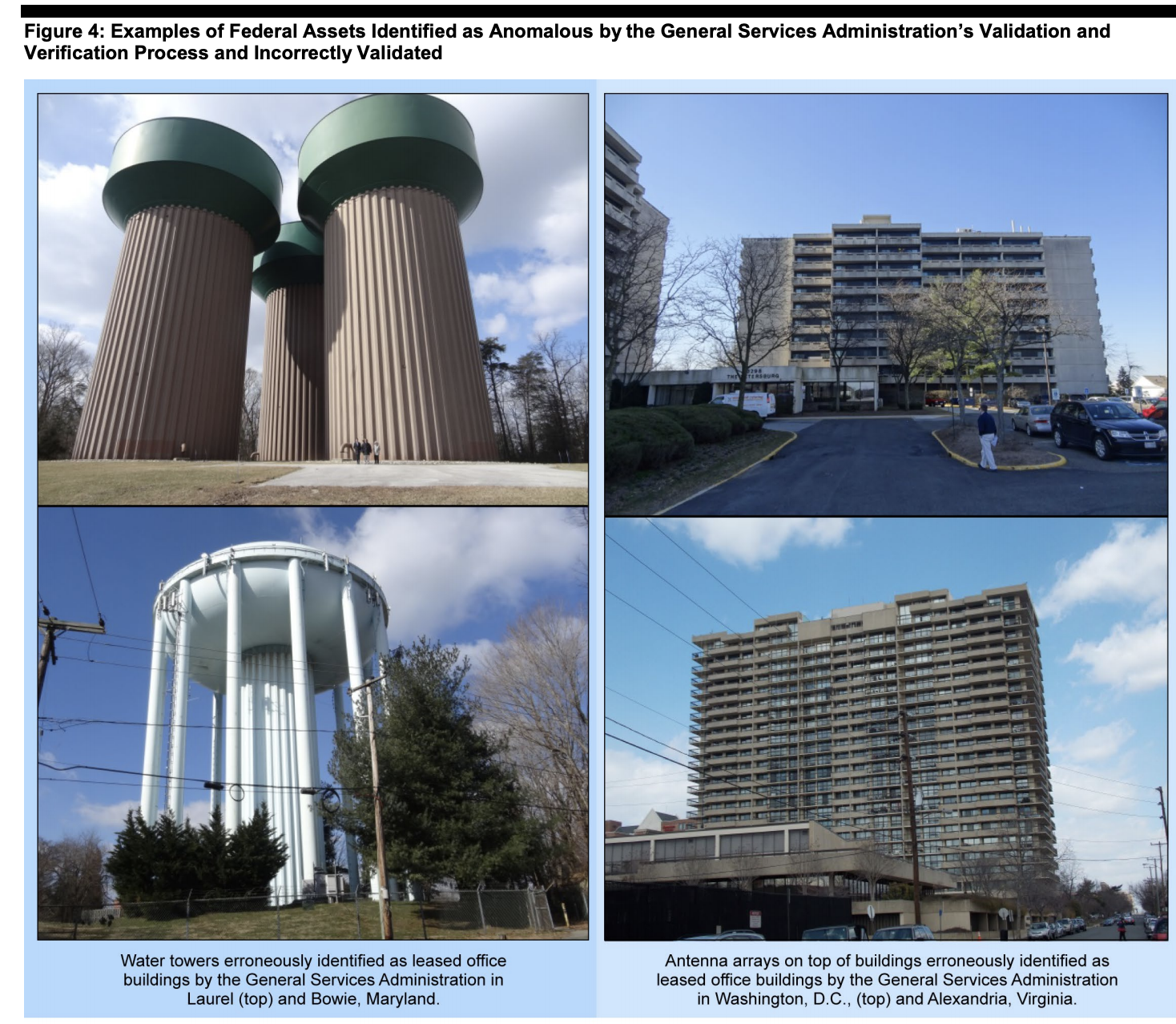 When describing how a process could validate these clearly wrong listings, GAO stated that agency staff “did not always consult the personnel with the best knowledge of the assets in resolving anomalies…. Instead, they relied on their own judgment when determining whether to forward the anomalies to asset managers to ultimately check the data and correct any errors.”

The problems identified by GAO were not confined to listings in the database. There is also a problem with property being left off the database entirely. When GSA was coming up with the process to make the federal government real estate information available to the public, they consulted with the intelligence agencies to stave off any national security risks. While understandable, the resulting guidance led many agencies to leave out information that is already easily retrievable

For example, Immigration and Customs Enforcement (ICE) left off five publicly accessible buildings that are identified in the mapping systems on its own website. Taking a gigantic step further, the Federal Communications Commissions withheld all of their properties from the database – despite the fact that the FCC website lists all of the locations and functions of their offices.

While national security concerns should be taken into account, the excessive withholding of information severely limits the value  of the database.

One other piece of information provided by GAO puts a dour note on quickly addressing these problems. The GSA provides agencies a list of anomalies in their submissions for them to validate or correct within 10 months A whopping 106,231 anomalies remain unresolved after 10 months.

Proponents of the bill requiring the public database stated that the main goal is to “provide transparency and help hold federal agencies accountable for reporting accurate information.”

With the woeful level of accuracy – this goal is still a long way from being achieved. There are billions of taxpayer dollars on the line. It’s time that the federal real property data managers get this mess straightened out. Even if that means going to a workstation on top of a water tower.