Welcome to the deficit blame game! The game where the only numbers that really matter are the polls. Name of the game, use rhetoric to score points. Tout your own accomplishments, good. Shred your adversary, even better.

Last week, the gut punch of a $779 billion annual deficit was released – up by 17 percent from last year. To make matters worse, the deficit could eclipse $1 trillion as soon as next year. If we had leaders running our country, this news would stir them into collective action to fix the most daunting challenge of our era. But we have cynical politicians. So let’s play the blame game!

In an interview with Bloomberg about the rising debts and deficits, Senate Majority Leader Mitch McConnell made the opening pitch – deflect:

“It’s disappointing, but it’s not a Republican problem…It’s a bipartisan problem: unwillingness to address the real drivers of the debt [entitlements] by doing anything to adjust those programs to the demographics of America in the future.”

Let’s set aside the entitlement point for a moment and ask – are Republicans to blame for the rising deficits? Republicans have had control of the House, the Senate, and the White House since January 2017. The month they took control, the Congressional Budget Office (CBO) released their 10-year budget projections and predicted a $487 billion deficit for Fiscal Year 2018.

What happened under the GOP to nearly double that projection? The Republicans passed a massive unpaid for tax cut and then quickly cut a deal to break through the spending caps. The former increased the annual deficit by about $164 billion and the latter increased the deficit by $68 billion. Add in another $32 billion in other deficit increasing bills and the GOP-controlled legislature added $264 billion to the deficit this year alone. If they did not pass any legislation, the deficit would have dropped from $666 billion to $515 billion. Great work from the party whose 2016 platform included the line “the federal fiscal burden threatens the security, liberty, and independence of our nation.” 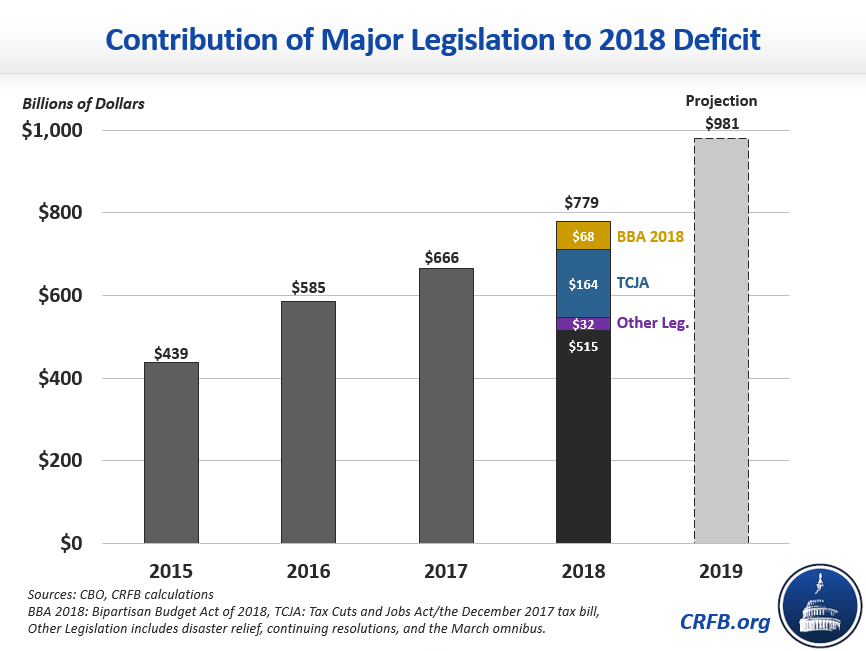 The GOP may take exception to the tax cuts being at fault for the deficit increase given that Treasury did see a slight uptick in federal revenues this year. However, this is misleading, given revenues would be up even higher if it was not for the tax cuts – and the full year effects of the tax bill are not in yet. Revenues actually shrunk as compared to the size of the economy and continual year-over-year revenue stagnation is far from paying for itself.

Baselines are really confusing, so think of it like performing surgery on a patient that has two different sized legs. The doctor is going to take an inch off of the shorter one promising that it would help it grow by two or three inches. If it only grows back the one inch, then we’re back where we started…with an off balance patient (readers of this slightly grotesque example may rightly draw the conclusion that maybe the solution is to shorten the other leg, i.e. cut spending).

In the same Bloomberg interview, Sen. McConnell went on to say that “I think it’s pretty safe to say that entitlement changes, which is the real driver of the debt by any objective standard, may well be difficult if not impossible to achieve when you have unified government…I think it would be safe to say that the single biggest disappointment of my time in Congress has been our failure to address the entitlement issue.”

If winners make policy and losers go home, what do we call people that get elected but don’t make policy? Senators, I suppose.

“Republicans blew a $2 trillion hole in the federal deficit to fund a tax cut for the rich. To now suggest cutting earned middle-class programs like Medicare, Social Security and Medicaid as the only fiscally responsible solution to solve the debt problem is nothing short of gaslighting.” -Chuck Schumer

“Under the GOP’s twisted agenda, we can afford tax cuts for billionaires, but not the benefits our seniors have earned.”  -Nancy Pelosi

In classic blame gamesmanship, Schumer and Pelosi present an argument where if one thing is at fault – it is responsible for the entire mess. GOP tax cuts hurt the deficit, therefore the tax cuts are to blame for the deficit problem. But take a look at this chart. 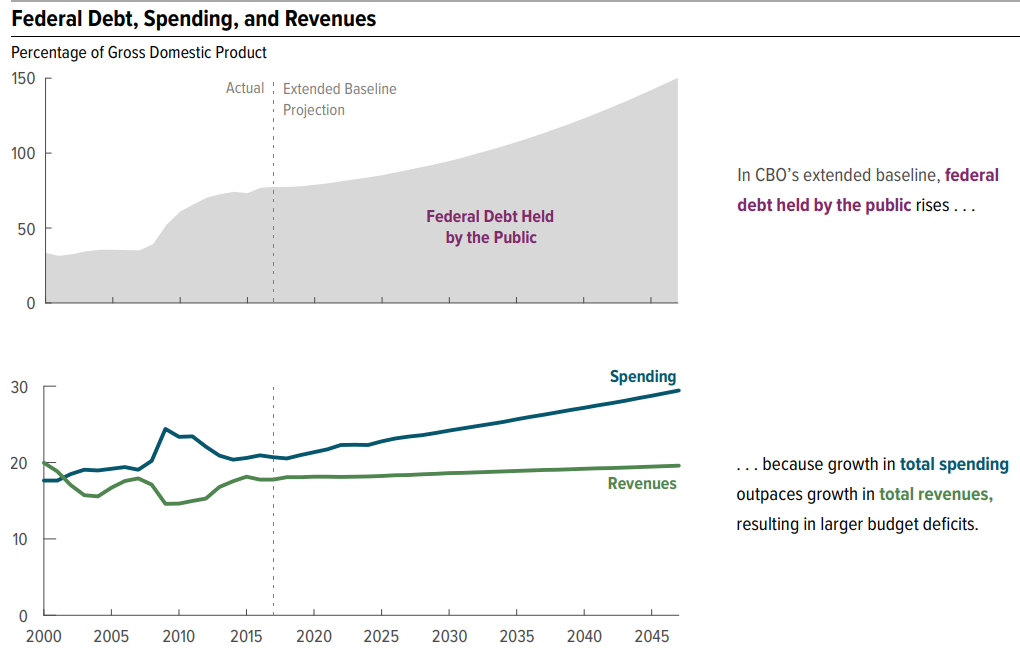 This is from CBO’s Long Term Debt Outlook from March 2017….a year before the GOP tax cuts were enacted into law. Spending far outpaces revenues then just as it does now. CBO attributes the explosive growth in federal spending to aging, health care costs per person, and rising interest costs. In other words, entitlements! 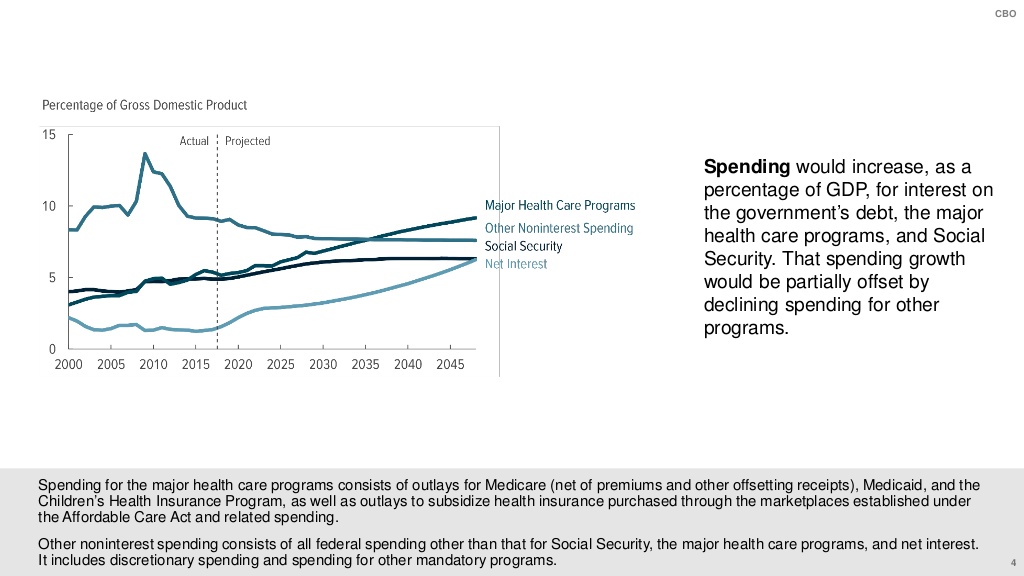 There is one thing that Senator McConnell got right in his interview with Bloomberg. The main drivers of our debt are the entitlement programs, along with interest payments on our massive national debt. Fixing our deficit and debt problems will require addressing our unsustainable entitlement programs.

Sure, Democrats can argue that tax increases could be used instead of entitlement reform, but that would require a massive tax increase on the middle class that they are purportedly trying to “protect.” And contrary to what Pelosi said, entitlements aren’t returning the benefits that have been earned – the average couple on Medicare will receive 3 times the benefits as what they paid in. 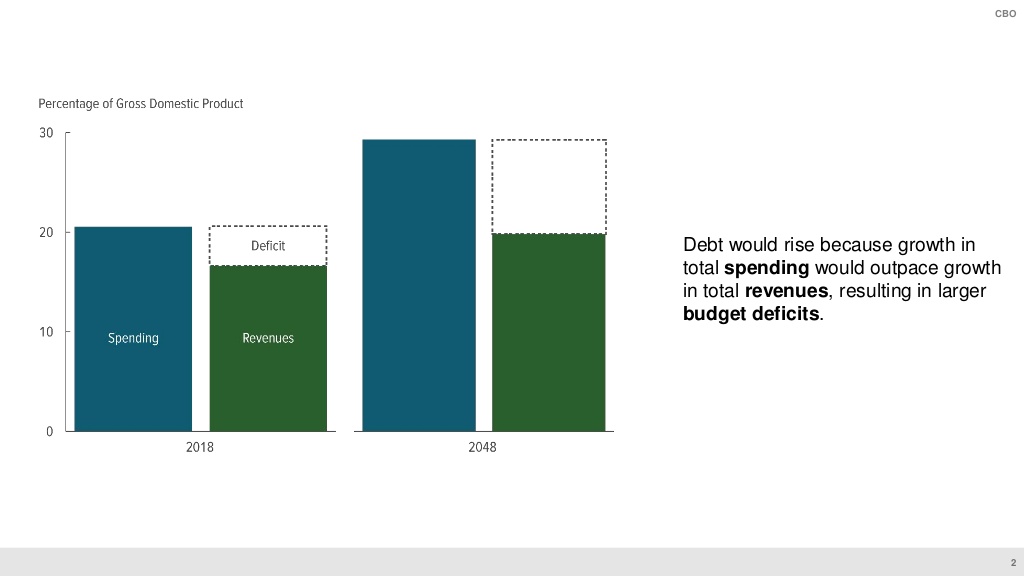 Naturally, President Trump had his own take on the deficit increase:

Increases to defense spending and disaster relief accounted for $63 billion of the deficit increase – so roughly half of the $113 billion year-over-year deficit increase. Hey, not bad given the source!

But, was the millitary boost neccessary? How can the defense department know what they need when they don’t even know where they spend a whopping 15 percent of the federal budget. The DoD has not been able to complete an audit in two decades and cannot account for $6.5 trillion worth of year-end adjustments. Don’t even think about closing a base. After the firing of a DoD official who may have been too good at finding cost savings, a Pentagon expert stated that “It’s one thing to identify waste, and another to actually get rid of it. The truth is that waste is built into the Pentagon budget; if you eliminate it, you eliminate jobs.” This is the Republican jobs program. Looks like Boeing is happy!

As for disaster relief, we have natural disasters every year. This extra disaster spending is as predictable as Congress casting blame rather than assuming responsibility.  Instead of acting surprised, Congress should do a better for budgeting for it.

And the Winner is….

Nobody. We all lost as soon as the game began. When we look back at this era – nobody is going to remember who won the soundbites and what the poll numbers showed- we are going to look back and see how petty and irresponsible this era of lawmakers were. If younger Americans don’t find and elect leaders that can put country before party, and think in terms that are longer than one election cycle, then it is fair to say the fault will be shared by us.