The Case for a League of Free Trading Democracies

During his 2008 presidential run, the late Senator John McCain laid out his vision for the United States to be at the center of a “League of Democracies” to advance the cause of liberal democracy across the globe. Sen. McCain saw the utility in such an organization being able to act “with or without Moscow’s and Beijing’s approval” and make the commitment that “to be a good leader, America must be a good ally.”

It remains as intriguing an idea today as when Sen. McCain began popularizing it, and it is distinctly interesting to consider such a scheme within the frame of international trade. As the United States reevaluates its overall relationship with China, it is a fortuitous environment for America and its allies to weigh our options.

With scrutiny against the Chinese government increasing by the day on issues from the CCP’s handling of the coronavirus to suspicion surrounding the activities of companies like Huawei and TikTok to persecution of the Uighurs, the appeal of decoupling has never been higher. Indeed, glaring human rights concerns around the use of Uighur forced labor to produce exports we use every day show a deliberate attempt by the CCP to make the West complicit in its activities and diminish the credibility of attempts to hold the Chinese government accountable.

This is where a trade-centric League of Democracies comes in. It is paramount that America and its allies smartly confront Chinese antagonism when it comes to trade and global supply chains. “Smartly” in this context means intentionally deepening the trade relationship between America and its allies as opposed to relying on aimless protectionist policies that end up hurting all parties involved by raising consumer costs and opening rifts between otherwise-allied nations.

Instead of imposing costs on ourselves by placing tariffs on the many goods we import from China, a more deliberate reevaluation of our relationship with China is a stronger bet. The united front of a trade relationship with our European allies on the basis of our shared commitment to an open, liberal society would make decoupling a smoother transition by providing us with a counterweight to Chinese economic influence. Best of all, the time is ripe for such an arrangement to come together.

In spite of the unfortunate news from U.S. Trade Representative Robert Lighthizer that swift progress on a U.S./UK trade deal would be unlikely before November, there is now greater room for imagination during a future Trump or Biden administration to press for a robust trade deal encompassing the U.S., UK, and EU. In the UK, Prime Minister Boris Johnson’s vision of a “global Britain” would undoubtedly help to inject energy into such an undertaking. As the PM said of his hope for expanding free trade and deepening the UK’s post-Brexit trade relationship with the EU, “we have the opportunity, we have the newly recaptured powers, we know where we want to go, and that is out into the world.” Capitals from Washington to Paris to Berlin should feel encouraged to magnify this vigor.

As the U.S., UK, and EU engage in trade negotiations between themselves and grapple with their shared discomfort with malign Chinese behavior, channelling Edmund Burke’s famous axiom that “when bad men combine, the good must associate” seems a straightforward way to maximize the benefit of all.

American Enterprise Institute Resident Scholar Dalibor Rohac highlights some of the greatest top-line benefits of a multilateral free trade deal between the U.S., UK, and EU. In observing that the “COVID-19 pandemic has given new salience to calls for a repatriation of supply chains,” Rohac sees greater reward in coordination than an “uncoordinated rush of governments to on-shore.” On-shoring, or shifting away from international trade in favor of domestic manufacturing, comes with similar tradeoffs to relying tariffs. With human and financial costs ranging from extending work hours to balance the increase in wages to importing all the materials needed for a given product, it is no wonder that a USA Today report found that a completely American-made iPhone would cost $2,000 (the most expensive model currently available is $999 by comparison).

Rohac goes on to counsel that “bringing much of the North Atlantic space to a broad agreement over trade and investment rules would be an important geopolitical marker.” Such a comprehensive prosperity generator would serve to strengthen both the economic and political ties between like-minded democracies at a time when the idea of liberal democracy is in doubt at home and under siege abroad.

There are, of course, issues that would need to be negotiated for such a sweeping international trade plan. British concerns over the level of American market access to the National Health Service (NHS) and foot-dragging on the part of Brussels during its latest trade talks with the UK would have to be overcome to get such a deal off the ground. Despite these hiccups, the fuller promise of a U.S./UK/EU trade deal is undeniable; the UK and several EU nations make up the list of U.S. top 10 trading partners. Likewise, the U.S. tops the list for both the UK and the EU as an aggregate.

Just as Sen. McCain’s League of Democracies was easier said than done, so too is a U.S./UK/EU trade deal committed to similar goals. The hard work that would have to go into fulfilling such a grand vision should not be minimized, but neither should the array of positives of committing to making it a reality.

Framing this expansive undertaking as a League of Free Trading Democracies captures how the agreement would pack the double whammy of near and abroad benefits for the U.S. and its allies. Where there is the responsibility of upholding the ideals of liberal democracy among the members, there is also the united front of challenging the influence of authoritarian regimes on the other. Where there are the benefits of job growth and reducing high-cost barriers within individual nations, there is greater prosperity for all nations in the collective.

Dynamic thinking has brought America and its allies to the great heights they enjoy now. There is no better time for America’s proponents of free trade and champions of liberal democracy to double down on that same spirit of dynamic thinking by leading the call for a League of Free Trading Democracies.

Tariffs Beg the Question to Administration: Do You Even Econ, Bro? 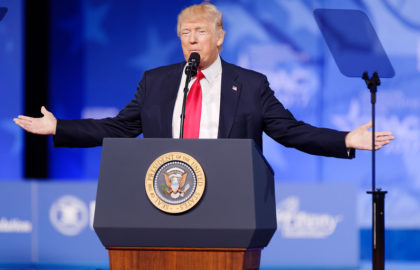 What Donald Trump Still Doesn’t Get About Trade