The following is an excerpt from Parked!, a 2013 report from the office of Senator Tom Coburn about Congress’s misplaced priorities that have led to a massive maintenance backlog at our national treasures.  Anyone interested in the return of earmarks should find this fascinating.

The practice of creating new parks by way of inside-the-beltway politicking, rather than getting a new park approved through merit, has resulted in a growing number of marginally significant and sporadically visited national park units.

Political power and special interests have often trumped the guidance of the first National Park Service (NPS) director that “the national park system…should not be lowered in standard, dignity, and prestige by the inclusion of areas which express in less than the highest terms the particular class or kind of exhibit which they represent.” The dilution of resources caused by parochial parks is a direct contributor to the $11.5 billion deferred maintenance backlog. The diminishment of the standard, dignity, and prestige of our National Park System over time is readily apparent when looking at the visitation and subsidies by decades of establishment. 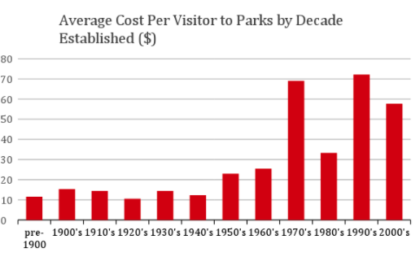 Of the top 25 most visited national park units in 2012, only 8 have been approved since 1970. In comparison, of the 25 least visited parks, 20 have been established since 1970. The emphasis on parochialism over priorities continues to this day, where the National Park System continues to be transformed from a cohesive mosaic symbolic of America’s greatest cultural achievements and natural landmarks into a parochial patchwork of legislative triumphs.

Leader of the “park of the months” club, perhaps no member of Congress has had a greater impact on the current ensemble of our National Park System than Representative Phil Burton of California.  Described by the Sierra Club president Dr. Edgar Wayburn as “a big engine…for the rest of us to lay track,” Rep. Burton tapped into the political power that flowed from his position as chairman of the House Subcommittee on National Parks and Insular affairs, eventually adding more national park and wilderness land than all of the presidents and congresses before him combined.  When all was said and done, during his four year tenure, Rep. Burton oversaw the creation of 30 new National Park units, 8 new national trails, and 8 wild and scenic river designations.  In total, one lawmaker placed nearly 10 percent of the entire landmass of the United States under the ownership and control of the federal government.

After losing a Democratic caucus election for House Majority leader by one vote, Rep. Burton was appointed chairman of the Subcommittee on National Parks and Insular affairs.  Upon receiving this designation, he immediately turned his attention to National Parks as an avenue to try to reassemble his power base for another shot at leadership.  Rep. Burton’s biographer described this transition, “…already the political wheels were turning.  Parks were good.  People liked them.  He could deliver more.  Members would owe him.  That would give him power.”

“Parks were good.  People liked them.  He could deliver more.  Members would owe him.  That would give him power.”

Rep. Burton’s tenure was a time when inside-the-beltway gamesmanship trumped the notion of sound policy making.  Burton used his position to “dominate the field, dazzle his colleagues, reward friends, and punish enemies.”   One of his aides provided insight into how he leveraged his position to affect other member’s districts. “He looked at parks not as adding acres here or there but as a political statement.  Some people want environmental impact reports.  He’d say ‘Get me a member impact report.  How many members are hurt and how many are helped by this?’”  To prove his superiority over other members, he once threatened Representative Jim Oberstar of Minnesota that he was going to turn his entire district into a national park. 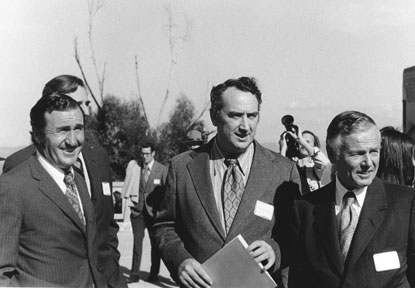 Another driving force behind Burton was not his passion for parks, rather his passion to prove his legislative superiority.  His biographer described his process as “the ultimate act of domination…he could show he was smarter than everyone else.”  No better anecdote embodies Burton’s mindset than when Rep. Burton asked his aide “Isn’t the GGNRA [Golden Gate National Recreational Area] beautiful?”  His aide responded, “Yeah, Phil…it’s a nice place.”  Burton retorted, “Not the place…the bill.”

The largest bill during Rep. Burton’s chairmanship was the National Parks and Recreation Act of 1978, authorizing $1.2 billion for more than 100 parks, rivers, historic sites and trails.  While some may consider this Act a great victory for conservation, a closer examination shows this legislation was one of the first major political earmark bills whose impact continues to resonate in today’s National Park System.  The National Parks omnibus package was the brain-child of Rep. Burton, who came up with the strategy when he needed a path forward to move legislation that affected his home district in San Francisco.  Figuring out how to cobble together enough votes to pass his bills, he inquired with his staff, “Why not get something for everyone?  Christ, we’ll pork out.”  So it began, Burton piled provisions into the package so that everyone had a pet project, thus nobody could vote against it.

“Why not get something for everyone?  Christ, we’ll pork out.”

Rep. Burton’s promises were sweeping, including park expansions, dams, and new park units for his colleagues, including the Santa Monica National Recreation Area where his fellow California Congressmen, Robert Lagomarsino, had memories of dancing on the roof of the El Mirador Hotel with his wife.  These promises were used to assure that members, who would otherwise oppose his bill, would vote with him.  As one lawmaker put it, “Phil had 150 members by the ears…all he had to do was smile and remind them their park was going into the omnibus bill.  The message was clear: on the Burton team, you give something to get something.”

“Phil had 150 members by the ears…all he had to do was smile and remind them their park was going into the omnibus bill.  The message was clear: on the Burton team, you give something to get something.”

Burton’s shrewd crafting of the bill went beyond exchanging parks for votes, as he avoided transparency of items in the bill that would make some legislators nervous.  After seeing the first draft of his bill, which included the customary headings and titles to identify sections of the legislation, Burton screamed at the legislative counsel responsible for drafting the bill to cut out the titles asking, “You want them to find everything?  You’re making it too easy!”  Burton’s obfuscations did not end at removing identifying titles, as he included a section that amended the Cuyahoga Valley National Recreation Area by striking out boundary map 90,000-A dated September 1976 and replacing it with Boundary map 644-90,003 dated May 1978.  Unbeknownst to even most Congressional staff, this seemingly innocuous modification actually added $29 million to buy land in the Cuyahoga National Recreation Area.

Dubbed by several newspapers, including the Washington Post, as the “Park-Barrel Bill,” the 157-page bill passed out of the House Interior Committee in under an hour and a half.  The House Rules Committee considered it an even less time, reporting it out in less than five minutes.  Rep. Trent Lott, who received a provision for the Gulf Islands National Seashore, observed, “Notice how quiet we are.  We all got something in there.”  Another congressman described the scope of the bill’s provisions as, “if it had a blade of grass and a squirrel, it got in the bill.”

“If it had a blade of grass and a squirrel, it got in the bill.”

The greasing of the wheels did not end when the bill was passed out of the necessary committees.  In order to clear seventy technical amendments when the bill moved to the full House by unanimous consent, Burton had to get them pre-approved by Kansas Representative Joe Skubitz.  This cooperation was assured by adding Section 611, which renamed Big Hill Lake in Kansas, the Pearson-Skubitz Big Hill Lake.  From there, the entire House debated the names of the National Parks, but no concerted debate occurred about the expansion of public lands or costs of the massive bill.  Under Burton’s cunning guidance the House approved the unprecedented bill by a margin of 341-60.

The individual members of the 95th Congress received their pet projects, Phil Burton received his sought after package, and the American people are still stuck footing the bill.  The immediate price of the omnibus was $1.2 billion, and the residual effects of this legislative boondoggle continues at nearly $37 million in annual operating costs for the 15 park units and 3 NPS managed areas that were established by the National Parks and Recreation Act of 1978.  This funding is allocated to some of the least visited, and most costly per visitor units, including six of the thirty-two least visited parks in the entire system.

Most of the excerpts in this article are from John Jacob’s book, “A Rage for Justice: The Passion and Politics of Phillip Burton.