First Featured In The Washington Examiner

Less than two miles from the Capitol building sits the brand new Audi Field. Home of the D.C. United soccer team, the new stadium hosted its first match on July 14, 2018, and gave D.C. taxpayers a first look at their $150 million “investment.”

The ownership group’s $250 million contribution to the project, combined with the $150 million it received from taxpayers, makes it the most expensive soccer stadium in American history, as well. This raises the question of why local taxpayers had to fork over $150 million to build a stadium that would represent a small percentage of D.C. United’s billionaire ownership’s wealth.

Unfortunately, the team is already scrambling to correct a major mishap. The stadium’s east grandstands host the cameras that televise matches. However, it does not take a meteorologist to know the sun sets in the west, shining light directly into TV cameras, as well as the broadcast booth. The team has already begun to pivot from their own goal by “pushing the start times back [to address] the stadium’s issues with the setting sun.”

Taxpayer funding is nothing new in stadium construction. Most sports stadiums, including Audi Field, are funded through municipal bonds, which are attractive to investors because the interest income is exempt from federal taxes. This subsidy was originally intended to support projects that had clear benefits for local taxpayers, such as hospitals, roads, and schools. But during the last several decades, sports teams have taken advantage of cities, demanding they issue these tax-exempt bonds in order to build or renovate privately-owned stadiums. While investors do not have to pay taxes on the municipal bond gains, local taxpayers are forced to pay back the debt through state and local taxes.

Since 1986, $17 billion-worth of debt to build sports stadiums has gone tax-exempt. The largestof these bonds was given to the soon-to-be Las Vegas Raiders. After being approved by the NFL to relocate from Oakland, the team began building a $1.9 billion stadium just off of the Las Vegas strip, with taxpayers on the hook for $750 million in municipal bonds.

The trend looks to continue. On July 10, 2018, the Tampa Bay Rays unveiled their “next gen stadium” with an estimated price tag of $892 million. The only problem is that they have no idea how to fund it. Rays principal owner Stu Sternberg vowed to find “creative ways” to fund the new ballpark, saying, “It’s not always going to be sunshine and roses … but we’re confident, we’re committed, and we believe we can get this done with all of your help.” *Wink, nod.*

Some in Congress have tried to end this dubious use of federal resources, introducing legislation to end federal subsidies for sports stadiums. On June 13, 2017, Sens. James Lankford, R-Okla., and Cory Booker, D-N.J., introduced a bill that “would close a loophole in the tax code that allows professional sports teams to finance new stadiums with municipal bonds that are exempt from federal taxes.”

However, their efforts have not been very successful. The House version of last year’s Tax Cuts and Jobs Act included language to eliminate federal subsidies for the construction of professional sports stadiums, but the provision was intercepted by Sen. Dean Heller, R-Nev., who removed it from the final package that was signed into law. Heller even used the Raiders stadium project as the defense for maintaining tax-free bond financing.

According to a 2016 Brookings Institution report: “evidence for large spillover gains from stadiums to the local economy is weak. Academic studies consistently find no discernible positive relationship between sports facility construction and local economic development, income growth, or job creation.”

New taxpayer-funded stadiums do little to benefit communities, detract from financing projects like roads and hospitals, and reduce federal revenues by billions every year when the nation is already $21 trillion in debt. The subsidies are all the more appalling because they are provided to billionaire team owners who do not need them.

Congress’s fiscal responsibility has fallen by the wayside this year, but ending taxpayer subsidized sports stadiums would give taxpayers a win they certainly deserve. Hopefully, the inaugural match at Audi Field signified the beginning of the end of stadium subsidies.

First Featured In The Washington Examiner 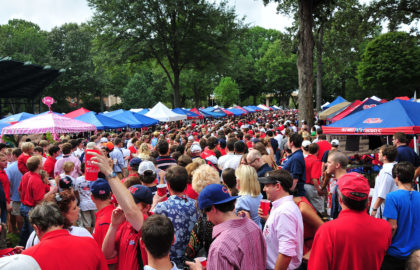