Christmas is right around the corner, which means it’s time for Senator Rand Paul’s annual ‘Festivus’ Report. This year’s edition is a compilation of more than $50 billion in wasteful federal spending that Senator Paul and his team found throughout the year.

Why does it matter?

The report points out that this money could have gone to a) paving 100,000 miles of 4-lane highways (enough to wrap around the globe 4 times); b) funding the entire judicial system for 7 years; or c) supplying healthcare to all of our nation’s veterans for 7 months.

Instead it was spent on the items like studying dating apps, improving TV programming in Moldova, and purchasing Bob Dylan’s artwork to display in Mozambique.

While DC-insiders often scoff at wasteful spending as rounding errors (while simultaneously scoffing at the notion of fixing the massive programs), the Festivus report points out that the average American pays about $8000 in annual taxes. In other words, the wasteful spending that Senator Paul found this year accounts for the taxes paid by 6.1 million Americans – more than the population of the entire state of Kentucky that the senator represents.

Which is why it’s so disheartening that Congress once again rushed through $1.4 trillion worth of spending with minimal debate and not even a single amendment this week.

Yes, there are a lot of grievances to air.

Let’s take a look back at the waste highlighted in 2019.

There’s an abandoned Civil War-era mental hospital in the Washington DC area that was tapped by the Department of Homeland Security in 2005 to be the site of its new headquarters. Turning this historic site into a modern federal agency headquarters has come with considerable challenges. Thirty percent of the site sits on an unstable slope, portions of the complex are sinking into the ground, and historic preservation and environmental regulations are causing major obstacles to the renovation efforts. It fact, after nearly a decade into the project, they are contemplating knocking down five building and starting over. That’s just one reason why the complicated and slow developing project has already cost $2.1 billion and is not expected to be complete until 2026.

The Summer 2019 Waste edition details how a large portion of a $463,000 went to study the mating calls of the Panamanian frog. The researchers examined how the mating call patterns change between frogs near the city and in the forest – surely a priority when 52 of 58 public housing units in New York have at least one housing quality violation.

Another research project highlighted was as easy as a Google search, but way more expensive. $51.7 million in federal grants were used for researchers to travel to Hawaii, where according to Paul’s report, they compiled “already existing literature the researchers found on Google Scholar between February and March 2017.”

By far the largest example of wasteful spending is the $48 billion in improper payments in the Medicare system. These payments include an international scheme to defraud the federal government out of $1.2 billion by charging Medicare orthopedic braces doctors prescribed “either without any patient interaction or with only a brief telephonic conversation with patients they had never met or seen.”

Perhaps the strangest entry in the Fall edition is the State Department spending $84,000 to purchase a wrought iron structure created by Bob Dylan (yes, that Bob Dylan). The artwork is displayed at the United States Embassy in Mozambique. This purchase was approved as part of the Arts in Embassies program that allots a half percent of an embassy’s construction budget for art work.

A former State Department employee points out that Mozambique ranks 180 out of 189 countries in the Human Development Index – a problem that will not be alleviated by a wrought iron sculpture created by a famous American singer-songwriter. Nor will the American taxpayers be happy to be paying for this costly piece of art when our budget is tangled up in red.

The largest example of taxpayer waste in the Fall Edition of the Waste Report is the $153 million that the federal government spends subsidizing the DC metro system – a system that is poorly performing and hitting twenty year ridership lows. Given these circumstances, it’s even harder to stomach seeing that money going towards items of dubious merit.

For example, the DC metro system spent at least $500,000 to maintain a self-cleaning toilet (the total figure is unknown because the metro lost the invoices for several years). Over the last two years, the toilet has been been unusable, sitting in disrepair. The DC metro system has also spent lavishly on public relations – including a new #backtogood campaign that will cost $400,000.

Two Afghanistan-related expenditures also made the latest edition of the Waste Report. The State Department spent $300,000 to sponsor debate and model UN performances in Afghanistan. The catch, these are performed in English, a language only spoken by 6% of the country.

For Afghanis looking to learn it, they probably aren’t going to get much help from the other waste example in the report – the $33 million Afghan Children Read program that spent money on error-riddled textbooks that are deteriorating in a warehouse. A government watchdog found several “book quality deficiencies, such as loose or blank pages, misspellings, and low quality paper.” They also found “five storage facilities held about 154,000 textbooks.” Given their quality, maybe it’s better that they are in warehouses instead of in classrooms?

The Paul Waste Report also highlights a $4.6 million National Institute of Health (NIH) study that examines the linkages between alcohol use and injuries. To the surprise of exactly no one, NIH found a link between higher alcohol consuming countries and alcohol related injury rates. Maybe someone should have directed them to some “hold my beer” videos and saved us a few million.

Again, to read more about these any many others, check out the Festivus report here! 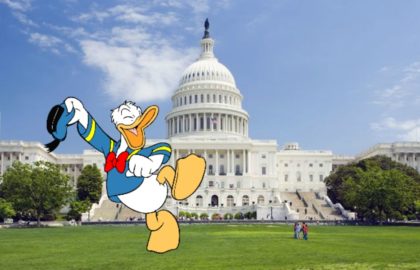