The ease and level in which the Republican Party has thrown fiscal responsibility out the window over the last three years has been a galling display of hypocrisy that will have devastating impacts on the economic future of young Americans. But, Democrats showed this week that they too can get in on the hypocrisy action.

Demagoguing the Republican tax bill that passed in 2017 as a tax cut for the rich and warning about the dangers of income inequality is the Democratic platform of late.

Yet in an about face this week, Senate Democrats (with the exception of Sen. Michael Bennet of Colorado) pushed for legislation that would cut federal taxes for the wealthy while adding $650 billion to the $22 trillion national debt.

Specifically, they tried to pass a resolution that would effectively eliminate the recently enacted cap on a valuable tax deduction – providing generous tax benefits that would accrue predominantly to the wealthy.

The issue at hand is the changes the Republican tax bill made to the state and local tax deduction (SALT). Previously, the federal tax code allowed taxpayers to deduct the amount a person pays in state and local taxes from their federal taxes. The SALT deduction was one of the largest tax expenditures in the code, costing nearly $100 billion each year and was projected to cost $1.3 trillion over the 10-year period from 2017 to 2026.

The GOP tax bill that passed in 2017 capped the amount of state and local taxes that can be deducted at $10,000, which is about half of the average deductions taken by those that used the deduction in New York, Connecticut, and New Jersey.

Attempting to dodge the new limit, New York, Connecticut and New Jersey concocted legislative workarounds to allow their wealthiest citizens to continue to get their federal tax breaks. One of the ideas is to set up a charity for them. Connecticut and New Jersey are setting up charitable funds that taxpayers can “donate” to instead of paying state taxes. This will allow the taxpayer to deduct the full amount of this payment because there is no cap on federal tax deductions for charitable giving.

The Treasury Department ruled that these dubious arrangements were not legal.

This week, Senate Democrats used a tool called a resolution of disapproval under the Congressional Review Act (CRA) that allows Congress to prevent recently promulgated regulations from going into effect. The vote failed on a nearly party line basis (43-52), with Sen. Bennet and Sen. Paul (R-KY) being the only crossovers – and the $10,000 SALT deduction cap will survive for now. 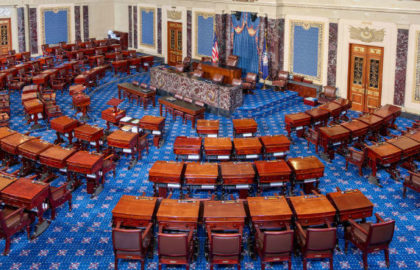