The amendment states that “Scientific meetings that are attended by scientific or medical personnel, or other professionals…shall not be considered conferences for the purposes of complying with Federal reporting requirements…and shall not be considered conferences for purposes of a restriction contained in an annual appropriations Act, based on Office of Management and Budget Memorandum M-12-12 or any other regulation restricting such travel.”

Based on the proposed bill language, it appears that a “conference” becomes a “scientific meeting” if the HHS attendee(s) can be classified as a “professional.” This newly redefined “scientific meeting” will exempt the agency for “purposes of complying with Federal reporting requirements” and “for purposes of a restriction contained in an annual appropriations Act.”

Questionable spending by federal agencies, often to resort destinations, prompted the adoption of several reforms intended to restrict lavish spending and enhance agency reporting. At the height of the controversy, government watchdogs uncovered an $800,000 expenditure by the General Services Administration (GSA) on a Las Vegas conference that included a $19-per-person “American artisanal cheese display,” $7,000 in sushi, $5,600 for “in-room parties,” and over $100,000 in employee travel costs just to “scout” the event in Las Vegas.

During the markup the amendment was not debated, but S. 2700, along with the “Scientific Meetings” amendment, passed unanimously. Stay tuned for more information. 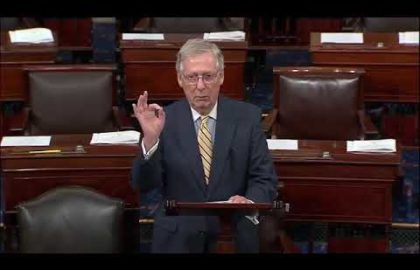 Time to Denuclearize the Senate