Welcome to the Inaugural QuizCap. Test your knowledge on all the important (though often under-covered) events that happened in Washington this week. It’s the quiz DC doesn’t want you to take.

The Senate passed their version of the Farm Bill this week. What percentage of the $867.2 billion (over 10 years) is spent on agriculture?

Despite the prominence of “farm” in the title, the vast majority of spending covered in the farm bill is for the Supplemental Nutrition Assistance Program (SNAP or “food stamps).

Despite a drop in the unemployment rate to a post-Great Recession low of 3.9 percent in 2018, enrollment in SNAP has nearly doubled from roughly 26,000 to just over 42,000 since a decade ago. The House Farm Bill includes new work requirements to be eligible for SNAP while eliminating some broad exclusions from current work requirements. The Senate passed bill did not include any changes and it is expected that no changes will be included in the version that will eventually be passed into law.

True or False: The Senate Farm Bill eliminates support for corporations such as Tyson, Sysco and Bacardi to advertise in foreign countries.

While the Senate bill, like the House version, does consolidate four programs that subsidize marketing and promotion for American companies in foreign markets, the bill actually increases total spending for this dubious endeavor by $515 million over the next 10 years.

Corn, wheat, soybeans, cotton, rice and peanuts make up 28 percent of farm receipts. What percentage of federal farm subsidies do these crops receive?

Must be nice…while many farmers will fight for their subsidies, the idea that American farming will collapse without federal support is belied by the success of many other crops and products.

William Douglas served on the Supreme Court for over 36 years (from 1939 to 1975). The shortest? Thomas Johnson, who actually authored the first opinion by the Supreme Court, but retired after just 163 days due to poor health.

The Senate passed 3 of the 12 annual appropriation bills this week. The bills must be reconciled with the House before going to the President’s desk to be signed. How many times have all 12 appropriations bills been completed on time since 1977?

A 10 percent success rate! The last time it worked was in 1997. It’s safe to say that the budget process is broken. While members are committed to returning to regulator order (and the massive $300 billion budget increase helps grease the skids), its still up in the air whether Congress will be able to pass any bills on time. There is currently a Joint Working Group that is working on improving the process. Godspeed!

The Congressional Budget Office (CBO) released their long-term budget projections this week. In 2048, when the oldest millennials will be nearing retirement, what is the projected Debt-to-GDP (we are currently at 78 percent Debt-to-GDP)?

Far and away a record high! While its contents may be duller than a dictionary, its findings are more frightening than a Stephen King thriller.

According to CBO, how much will it cost (combination of lower spending or higher revenues) every year to simply stabilize our national debt at current levels?

That is just to keep it at its current abnormally high levels. To get it down to the 50-year average (41% debt-to-GDP) would take $630 billion in changes. Every year! The longer reforms take to enact, the harder it will be on the younger generations. The debt is not a partisan issue. It’s a generational one. Or as CBO more dryly puts it: “Reducing deficits sooner would probably require older workers and retirees to sacrifice more but would benefit younger workers and future generations. Reducing deficits later would require smaller sacrifices from older people but greater ones from younger workers and future generations.”

Last Friday, the Government Accountability Office (GAO) released a report on the Nation’s Fiscal Health. It found our current fiscal path is…

GAO, like so many other non-partisan independent entities, unequivocally warned our nation’s leaders that our fiscal path is not sustainable, adding that “the longer action is delayed, the greater and more drastic the changes will have to be.” The response from Congress: crickets.

GAO Comptroller General Dorado testified before a Senate committee on Medicaid fraud and improper payments? Of the $596 billion in Medicaid payments made in 2017, how much were paid improperly?

That is up from $29.1 billion in 2015. Of the improper payments, $36.4 billion were overpayments. Medicaid has been on GAO’s high-risk list since 2003 due partially to its inadequate fiscal oversight and improper payments. The trends appear that it won’t be making it off the high-risk list anytime soon, which is especially worrisome given its one of the fastest growing federal programs (its expected to grow to $958 billion by 2025).

The Inspector General (IG) of the Department of Health and Human Services (HHS) released a report on Opioid use in Medicare Part D (the prescription drug program). In 2017, what percentage of beneficiaries were prescribed at least one opioid?

Further, 10 percent of Part D beneficiaries received opioids on a regular basis (3 or more months in a single year). The report flagged that “opioids may have been necessary for many of these beneficiaries, but these high numbers raise questions as to whether opioids are being appropriately prescribed and used.” One especially alarming example was a Florida physician ordering his patients 2,692 opioid prescriptions costing Medicare $570,000 – including one patient that received six times the CDC-recommended dosage level for an entire year. Another beneficiary received 10,000 pills of oxycodone from 26 prescribers.

An IG report on the monitoring of grants awarded by HUD's Office of Community Planning and Development (CPD), which is in charge of $6.6 billion in grants each year, found what percentage of competitive grants were being monitored?

In a comically large oversight gaffe, since 2014, CPD has not monitored between 62 and 74 percent of its approximate 6,200 grantee programs. The report goes on to say that even the ones that are monitored are not done properly. Indeed, “of the sample items reviewed, 100 percent of risk analyses and monitoring engagements examined evidenced many and varied instances of noncompliance with requirements.” The IG determined that $907 million could have been saved with better controls. The CPD allocates $3 billion in Community Development Block Grant Funds (CDBG) every year. Given the woeful oversight, its no wonder that watchdogs have found CDBG funds being used for Starbucks, IHOPs and doggie day cares.

A Look At America’s Future Voter 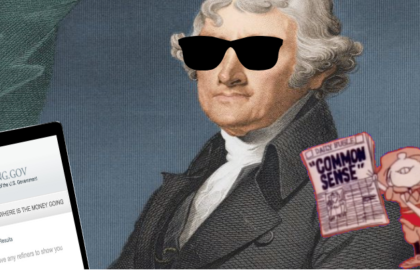