Welcome to the weekly QuizCap, a fun way to test your knowledge on what’s going on in Washington. This week we head back to the early 2000’s, Perkisize, and go on another excellent adventure!

The headlines this week have been dominated by developments that Trump opponents hope will lead to an impeachment. Of the following presidents, who was NOT impeached?

While he is the only President to resign mid-term, President Nixon actually stepped down prior to impeachment proceedings. Both Bill Clinton and Andrew Johnson were impeached by the House of Representatives, but the Senate did not vote to convict.

That’s right. The Senate hasn’t done its job in respect to this appropriations bill since the beginning of the Millennium! Lawmakers are trying to end the drought by ramming through the bill with minimal amendments, despite the fact the bill will cost taxpayers hundreds of billions of dollars. Getting the job done or business as usual?

A Department of Health and Human Services (HHS) "healthy lifestyle initiative" gave over $1 million in grants to what fast food chain?

As part of the Department of Health and Human Service’s (HHS) “Healthy Lifestyles Initiative,” a community in Kansas City will receive two grants totaling more than $1.1 million to build both a Dunkin’ Donuts and a combination Wendy’s and Pizza Hut. The only thing healthy about this program is the healthy portion of taxpayer dollars flowing to billion dollar fast food franchises.

What percentage of children in the U.S. are obese?

According to the Center for Disease Control (CDC), almost 20% of children (13.7 million) and almost 40% of adults (93.3 million) in America are obese. Cheeseburger anyone?

Speaking of overabundance, a recent OIG report looked at improper payments for a particular treatment. Out of the 100 Medicare payments to hospitals that the OIG sampled, how many were improperly paid?

All 100! The OIG found that the payments had already been paid for by Medicare as part of a bundled package and then billed for again separately. This double dipping resulted in an estimated $21.5 million in overpayments.

Another OIG report examined Medicaid spending on compounded drugs(customized medications) and found that spending on these drugs increased by how much since 2006?

An eye popping 625% increase in spending on compounded medications, and spending on topical compounded drugs such as creams, gels, and ointments grew even faster. The OIG reported that 550 pharmacies billed extremely high amounts to Medicare Part D for these drugs in 2016.

The DoD and National Science Foundation spent $2.2 million on developing robotics for what purpose?

Beerbots! These Robot bartenders were programmed to serve cold cans of beer to “thirsty graduate students,” as part of a project funded by grants totaling $2 million provided by the Department of Defense (DOD) and the National Science Foundation.

One of the more bizarre expenditures of former EPA Administrator Scott Pruitt was a $43,000 sound proof phone booth. How many phone calls did he make from that phone booth?

He used it one time for a 5-minute phone call to the White House. Talk about an expensive phone plan.

From 2007 to 2016, which generation had the fastest growing household income?

Millennials household income increased by 39 percent, from $36,462 to $50,849 while boomers actually had a 15 percent decrease over the period. This is likely caused by demographic patterns - boomers are retiring and millennials moving up the corporate ladder.

While that’s some good news for millennials, a recent report found some not-so-good news for even younger generations. How much of the federal budget goes to children?

According to a new Committee for a Responsible Federal Budget (CRFB) report, “nearly all dedicated revenue goes toward programs for adults.” The federal government brought in $1.2 trillion in revenues last year, of which 71% went toward the elderly, 23% toward non-elderly adults, 4% toward infrastructure, and finally, “only 2 percent of total dedicated revenue went toward children, virtually all as part of Social Security.”

What did Congress do to address the national debt and unfunded liabilities this week?

CBO released a report this week that Congress will need to cut spending or raise revenue by $400 billion every year for the next 30 years just to stabilize the debt at historically high levels. Time to get to work, Congress! 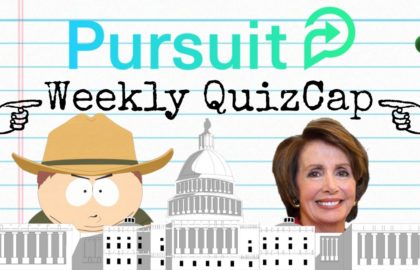