Welcome back to the Weekly QuizCap. This week, we highlight Uncle Sam’s spooky spending, election day facts, and how well informed voters are before the midterm election.

We hope you had a fun and spooky Halloween! To go along with the season, we put together a Halloween-themed waste report. True or false. Taxpayers paid for a Frankenstein opera.

A grant of $10,000 was awarded to the West Edge Opera in Berkeley, California through the National Endowment for the Arts to produce Libby Larson’s Frankenstein, The Modern Prometheus.

Funded through a $10,000 National Endowment for the Arts grant, horror flick lovers gathered at the 9th annual Slash Film Festival. In what country does the festival take place?

The festival boasts over 10,000 visitors and 50+ movies. With such a popular following, is it unreasonable to think our foreign spending could have been put to better use?

Over a four-year period, the federal government recorded $194 million on wages and earnings that belonged to what group?

Scary! Fraudsters can use social security numbers of the deceased that have not been properly filed as dead to scam the system. IG’s also found that Ohio paid $94 million in Medicaid payments for beneficiaries that were dead.

Now that Halloween is over, election day is right around the corner! In 2016, what percentage of the voting age population participated?

Older Americans typically vote at higher rates than young Americans. In 2016, 70.9% of Americans 65 years or older voted. What percentage of Americans ages 18-29 voted in the 2016 election?

According to the U.S. Census, only 46.1% of young Americans voted last election, but there is good news,”voters ages 18 to 29 were the only age group to report increased turnout compared to 2012, with a reported turnout increase of 1.1 percent.”

Non-presidential election years usually have lower turnouts. The 2014 midterm election saw its lowest turnout since 1942, seeing only 36.4% of eligible voters go to the polls. Why was turnout so low in 1942?

There’s no excuse for low turnouts today, but back then, Americans were fighting Nazis. A pretty good excuse to miss election day…

Some say states, who decide how and when to register voters, make it too difficult for their citizens to vote. As of today, 14 states and the District of Columbia have automatic voter registration. What was the first state to implement the policy?

Oregon was the first state to automatically register its citizens to vote. Surprisingly, only 35.5% of Oregonians voted in the 2014 midterm election. The other thirteen states include: California, West Virginia, Vermont, Connecticut, Alaska, Illinois, Colorado, Georgia, Maryland, Massachusetts, New Jersey, Rhode Island, and Washington.

The biggest question mark next week is whether Democrats will take back the House. They need to flip 24 states to win the House majority. What is the largest swing in United States history?

During what was at the time the largest depression in our nation’s history, the 1894 election saw the Republicans win a whopping 130 seats – the only time that there has been a triple digit swing. On average, the President’s party has lost 30 seats in the House during the midterm. That’s good new for the House Democrats.

Though it is a long shot, the Democrats need 3 seats to win the majority in the Senate. What is the biggest swing in Senate history?

During the Recession of 1958 (detecting a theme here), Democrats won the Senate majority by flipping 12 seats (they also won both new Alaska seats). Given the difficult Senate map, Democrats are hoping to not lose seats to the Republican majority this go around.

The scariest figure of all came out this week. The Treasury announced that it will issue a total of how much Treasuries in 2018 to finance our deficits?

They will issue $1.34 trillion in debt by the end of 2018. That is the most since the economy was in a deep recession in 2010. While the official deficit was $779 billion, the federal government also finances other activities through Treasuries, such as student loans.

In a recent poll, what percentage of voters said they had seen, read or heard of the news story that our federal deficit ballooned to $779 billion?

Despite a majority of Americans believing that addressing the national debt is an important issue, only 17 percent heard about the fiscal black (red?) mark. Double the amount of people (33 percent) learned about Senator Warren’s DNA. Great job, press!

What did Washington do this week to address our $21 trillion national debt and out-of-control long-term liabilities?

Congress is in recess and Director of the National Economic Council Larry Kudlow indicated that the President’s budget would not touch entitlements, which is the main driver of our debt. Time for some people to travel to Oz to find some courage. 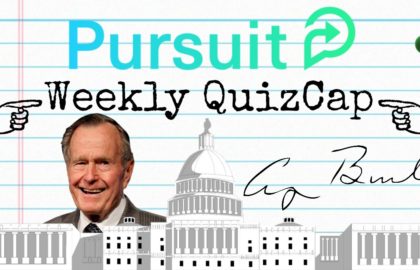