Last week, the Trump Administration released “The Financial Report of the Federal Government,” an annual report from the Department of Treasury and the Office of Management and Budget (OMB) that contains the financial statements of the United States.

It reads just about how it sounds. But what it lacks in excitement it makes up for in dread. Especially for young Americans.

The takeaway… “The projections in this Financial Report show that current policy is not sustainable.”

But if you’re not looking to draw social security sometime soon, the information contained in this report is of critical importance. Not just to the prospect of a prosperous future. But to the urgency with which this problem needs to be addressed.

Hint: the longer we wait, the harder it hits younger generations.

Exactly how much harder? Let’s look at the details.

The report defines fiscal sustainability as a fiscal policy “where the debt-to-GDP ratio is stable or declining over the long term.” In other words, our economy needs to be growing faster than our debt.

Lately, our debt has been growing much faster than our economy. In fact, the debt-to-GDP ratio has nearly doubled over the last decade. 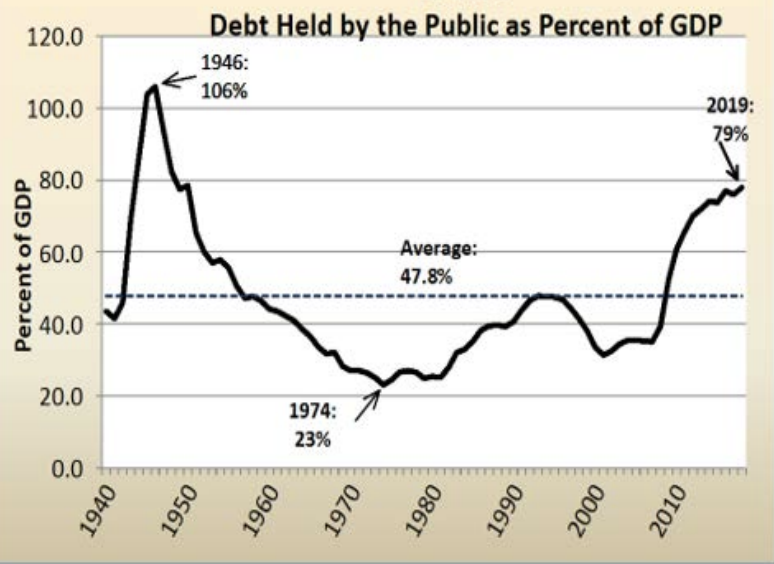 But that growth will look like molehills next to the mountains of debt coming in the future. The report notes that not only has the annual deficit number grown for four consecutive years (a worrisome trend), the annual deficit “is projected to continue to grow in almost all of the next 75 years.” 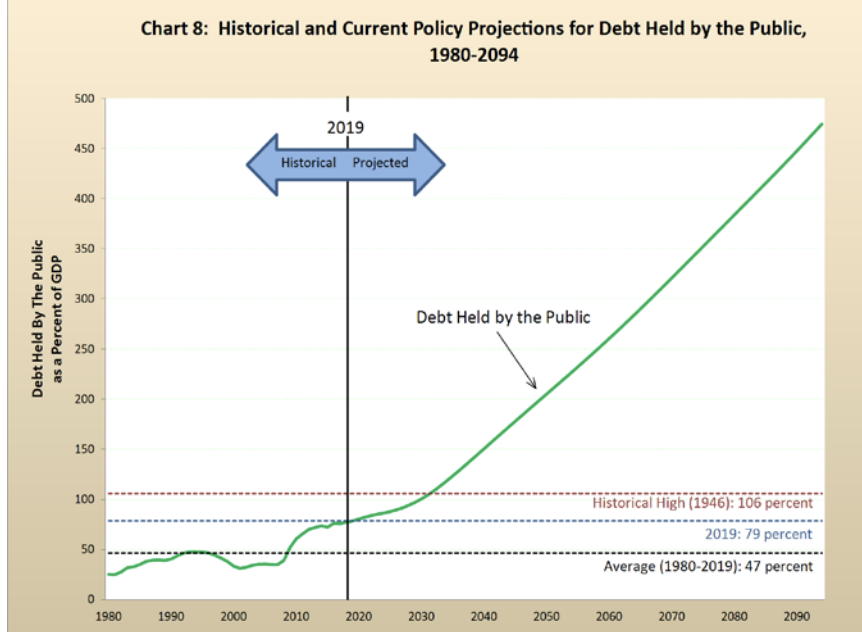 What is causing this perpetually widening fiscal gap?

Simple. Again, right out of the report: “After FY 2024, increased spending for Social Security and health programs is projected to result in increasing primary deficits that will peak in FY 2040 at 3.9 percent. This effect is due to the continued retirement of the baby boom generation and increases in health care costs.”

Yes, those programs that the head of this administration has pledged not to touch. In doing so, he is pledging to screw over millions of young people.

The report actually lays out exactly how badly we will be screwed over.

In order to put the federal government on a sustainable fiscal path, Congress will need to close the financing gap (by reducing spending, increasing revenue, or a combination of the two) by 3.8% of GDP over the next 75 years. That translates to roughly $58 trillion dollars total or $776 billion annually.
But if our leaders in DC wait 10 years to act, the changes needed to reach fiscal sustainability will be 4.5% of GDP over the next 75 years – or roughly $900 billion dollars annually. Waiting 20 years will require $85 trillion – or $1.1 trillion annually.

In other words, continued ignorance and inaction by our current leaders will cause a massive intergenerational transfer of wealth to the tune of tens of trillions of dollars.

Continued ignorance and inaction by our current leaders will cause a massive intergenerational transfer of wealth to the tune of tens of trillions of dollars.

Or as the report puts it, dryly but clearly, “future generations are harmed by a policy delay because the higher the primary surpluses are during their lifetimes, the greater is the difference between the taxes they pay and the programmatic spending from which they benefit.”

Some may scoff and say that these projections are just that…projections. Who knows what is going to happen?

The report has an answer for you: “While the estimated magnitude of the fiscal gap is subject to a substantial amount of uncertainty, it is nevertheless nearly certain that current fiscal policies cannot be sustained indefinitely.”

We may not know exactly how bad it is going to be. But we do know with certainty that we are on a dangerous path, one that will be easier to divert from with quick, decisive action.

Unfortunately, most of our leaders in Washington don’t want to talk about this damning report, let alone fix it. The only way to get them to pay attention is to make it a priority. It’s going to take the group that has the most to lose from the lollygagging to stand up and make this a voting issue.