NEA Funding and the Senate’s Glass Case of Emotion

If there’s one thing you can always count on when it comes to government, it’s Congress doing the wrong thing all the time even when attempting to do the right thing some of the time. Why is that you ask? Because taxpayer money is essentially the pure smell of desire to these people—and spending away our future is as irresistible to Republicans and Democrats as the latest cologne is to Brian Fantana.

Yesterday’s Senate vote to call up President Trump’s rescissions package is case-in-point. After passing a mind-numbing $1.3 trillion omnibus earlier this spring—and busting the budget caps by $300 billion in the process—Congress’ spending bender was attempted to be curbed a bit. The Office of Management and Budget crafted a rescissions package to cut back on roughly $15 billion in unobligated expenditures and presented the package for consideration.

The House did their job and passed the bill earlier this month. No small feat these days. And as per usual, the Senate—despite only needing a simple majority—took one whiff of fiscal responsibility and determined that it stung the nostrils.

After taking a pass on trimming .004017 percent of total federal spending for the next five years, the Senate is instead making it rain with our money. Indeed—right now the United States Senate is considering all manner of new appropriations bills to ensure that every last cent of that $1.3 trillion in discretionary funding is dried up. Including $155 million each to the National Endowment for the Arts and the National Endowment for the Humanities.

That’s a $2 million increase over the FY2018 enacted levels.

When President Trump proposed eliminating federal funding for the NEA and NEH (an idea harkening back to the Reagan Administration), some cultural elites suggested that such an approach would “gut our nation’s long history of support for artists and art programs.”

Last year, we published a piece debunking this claim and highlighted a report that showed how federal funding for the arts would have little-to-no impact on the survival of the arts in the United States. Indeed, most of the NEA’s grants go to the wealthiest art institutions. It’s little more than welfare and cronyism for art elites—using tax dollars to prop up entities that are the most well-connected.

The notion that if we eliminate a couple hundred million dollars in taxpayer-backed funds that American art and culture will be gutted is laughable on its face. Forget that a single Marvel movie this year just made $2 billion or that NEA/NEH funding represents a mere .2 percent of total art assets (the overwhelming majority coming from non-profits and charities), the fight over such grant programs is illustrative of why America sits at $21 trillion in national debt.

Every single program—no matter how big or small—has an entrenched interest group and lobby that declares, often through hyperbole, that the world will end and the sky will fall if there are cuts or if the program is phased out. Some attention-seeking politicians even proclaim that people will die if some federal spending is pared back.

The truth is that we’re hurtling toward a debt crisis that is threatening our future. And like Ron Burgundy jumping into a bear’s den, there will come a time when our politicians realize that their profligacy put us—and their children and grandchildren—in this untenable position.

Millennials are an incredibly capable, generous, and creative generation. They don’t need pre-packaged and archaic government subsidy programs to a few elite institutions to ensure that American art and creativity thrives in the future.

If only Congress would step outside its glass case of emotion to give them the opportunity. 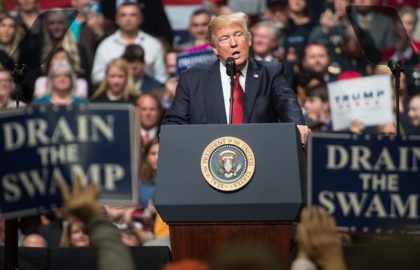 If You Care About Making America Great Again, Inspectors General Are Your Friends