Meet the Deadpool of Federal Programs

Deadpool, the Marvel comic books antihero, is known for his wit and accelerated healing power. Wade Wilson gained the healing superpowers through an experimental treatment that cured his terminal cancer. Assuming the super hero mantra, Deadpool can quickly recover from any injuries – including cinching bullet wounds and regrowing lost limbs.

Parrelling Wade Wilson’s ascent from a terminal fate to an impenetrable entity, the Essential Air Service (EAS) was created in 1978 to temporarily help small, rural airports adjust to the deregulation of the airline industry. Despite many attempts by Congress to curtail the program, like Deadpool, it miraculously heals itself after every blow.

EAS subsidizes commercial airlines that serve rural airports with two to four round trip flights each day to a medium or large hub airport.  Airlines are paid a set fee by the Department of Transportation (DOT) for each trip they make, regardless of how many passengers that fly.

Originally, the only criteria for a community to be eligible for EAS subsidies was that the local airport had to be servicing flights on October 24, 1978 (the date airlines were deregulated). That meant 746 communities were eligible, though only 300 have ever received subsidies.

In 2000, Congress changed the eligibility requirements to exclude communities within 70 miles of a medium or large hub airport. They also excluded communities that required more than $200 in support per passenger unless the airport was more than 210 miles from the nearest large or medium hub airport.  For example, if a community received $1 million in annual support, but only had 4,000 passengers for the year, that would be a $250 per passenger subsidy rate. That airport would no longer be eligible to participate in EAS – unless they were located further than 210 miles from the nearest medium or large hub airport.

In 2012, Congress attempted to further reduce the scale and spending on EAS. The FAA Modernization and Reform Act of 2012 incrementally decreased authorized spending from $143 million to $93 million over time.

While Congress intended to limit EAS airports and spending – these changes were overridden by two factors – a surge in revenue from a different source and the generous waiver authority of the Department of Transportation. These are the healing powers that provide the program Deadpool-like invincibility.

When Congress lowered the authorization for EAS in 2012, they also removed the $50 million cap on the amount of overflight fees that go to EAS.  Overflight fees are paid by planes that fly into US airspace without landing or taking off. DOT originally projected that the overflight fee increases would generate $69 million in revenue, however the fee incomes have actually been much higher than projected.

Additionally, Congressional appropriators ignored the 2012 directives to decrease spending in the program – maintaining the appropriated dollars level.  A combination of larger than expected overflight fees and appropriating well above authorization levels resulted in a massive funding increase for EAS. As the Congressional Research Service (CRS) put it: “this has had the effect of increasing total outlays for EAS subsidies, contrary to the expressed intent of at least some Members of Congress.”

Not only did the reforms fail to cut spending, they also failed to remove airports that Congress deemed inappropriate for program participation – whether for excessive subsidies, low traffic levels, or reasonable driving distance to airports with unsubsidized service. This is because the 2012 FAA reauthorization provided the DOT authority to issue an unlimited number of waivers to communities that do not meet the $200 subsidy per passenger limit or the 10 passengers per day requirement.

As the Congressional Research Service (CRS) puts it matter-of-factly: “The changes adopted in recent years, including in the FAA Modernization and Reform Act of 2012, have not proven effective in controlling program costs, in part because communities that fail to meet certain eligibility requirements almost always are granted waivers upon request.”

Despite Congress’s numerous concerted efforts to curtail the program, EAS spending has grown by 600% since 1998 and has doubled since 2008. The number of EAS airports has also dramatically increased. In 1995, there were 95 EAS communities. In 2016, it was up to 173. The cost of the program has also dramatically increased. In 2000, EAS subsidies cost $1 million per community. Today, it is up to $2.5 million per community.

In addition to the ineffectiveness of Congressional reforms, spending has increased for a multitude of reasons, including: 1) lack of competition amongst airlines bidding to serve EAS communities; 2) costs are not a metric DOT uses when evaluating bids; 3) EAS subsidizes multiple routes from the same airport or longer, more expensive flights than necessary; 4) planes used are larger than their passenger load (a Government Accountability Office (GAO) study found that EAS flights had 49 percent capacity versus 83 percent for all domestic flights); and 5) EAS pays airlines based on flights – not passengers – making it “more profitable to charge high fares to relatively few passengers than to maximize the passenger load with lower fares.”

The Essential Air Service even allows for communities to charter plane service rather than subsidizing commercial flights. Currently, six communities receive chartered plane service, compliments of the federal taxpayer:  In 2016, an airport in Victoria Texas’s charter service cost taxpayers $546 per passenger (it cost the passenger $100) to shuttle 10 passengers per day to Dallas. Victoria is only a two-hour drive to San Antonio or Houston (a bus ticket costs $22).

The airport in Johnstown, Pennsylvania, which has been referred to as the “airport to nowhere,” has six commercial flights per weekday – that serve less than four passengers per flight. Passengers can pay $29 to fly from Johnstown to Baltimore or Pittsburgh– while the taxpayers pick up the other $283 of the costs for each flight.  The airport is only a two-hour drive to Pittsburgh – instead taxpayers pay $2.3 million every year.

Another Pennsylvania airport, Lancaster Airport, flies passengers to Baltimore for $29 with the help of $378 per passenger subsidies. It is only 84 miles away from BWI, 86 miles from Philadelphia International Airport, and 28 miles from Harrisburg International airport (MDT).

McCook, Nebraska has the highest per passenger subsidy, at $778.48 per passenger for the 2076 passengers that flew in 2016. It only cost the passengers $49 to fly from McCook Ben Nelson Regional Airport (named after a former Senator) to Denver, CO. In 2016, we paid $2.4 million to subsidize the travel of six passengers per day from the airport.

There are nearly 20,000 towns in the United States. Should American taxpayers in 99 percent of the communities subsidize the air travel for people in the 144 communities served by EAS?  Congress appears to believe so.

Last week, the House of Representatives considered a bill to reauthorize the FAA. The bill included an extension of the Essential Air Service without substantive reforms.  Rep. McClintock of California offered an amendment to eliminate the program – stating that “a $275 million program out of a $4 trillion federal budget seems like a drop in the bucket, and I agree we’re not going to balance a trillion dollar annual deficit just by cutting programs like this.  But if we can’t end this 40-year old temporary program that has doubled in cost in the last ten years – the kindest and easiest cut of all – then I fear we will never summon the courage to get our budget back to balance before we bankrupt our country.”

The amendment to eliminate EAS failed by an overwhelming vote of 113-293.  Despite recommendations from the Trump budget to curtail or eliminate the program, it even failed to get a majority of Republicans (109-115).

There is one substantive difference between Deadpool and EAS.  While Deadpool made over $300 million in American theatres, the Essential Air Service program will continue to spend $300 million in taxpayer dollars to subsidize the convenient travel of a select few communities.

Take This Quiz and You’ll Know More About the Omnibus Than Your Congressman! 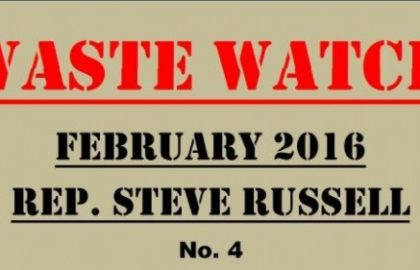