Labor Day and the Fight for the Next American Workforce

In 1894, Congress designated the first Monday in September as a legal holiday to honor the achievements of American workers. The concept of the Labor Day holiday was created out of the labor movement in the late 19th century when workers championed fairer hours, safer working conditions, and better treatment from their employers. Since that time, per capita income is up from $4,096 in 1900 (today’s dollars) to $59,609 in 2016 and working conditions have never been better.

Today’s labor movements have attached their causes to previous labor movements, garnering support among many Americans to tackle what they think is a deficiency of the American workplace. Three of the most popular movements call for a $15 minimum wage, mandatory paid maternity leave, and student loan forgiveness. Legislation for all three issues has been introduced in Congress and make for contested political debates.

But many times, labor policy issues are roped into larger societal issues that have repeatedly followed the will of the American people.  According to a U.S. Department of Labor paper on pay and working conditions, “government intervention often reinforce[s] existing trends, [such as in the case of] the decline of child labor, the narrowing of the wage structure, and the decrease in the hours of work.” To that end, workplaces are already instituting paid maternity leave, student loan incentives, and offering the highest possible wages in order to compete with other businesses as well as societal trends.

These issues may seem like the labor fight of our time, but in reality, employers will adapt and catch up with trends in order to stay competitive in the marketplace. Those that seek the continuation of a prominent American workforce should turn to an issue that will plague the potential of the next American workforce – our country’s fiscal health. There cannot be sustainable job opportunities and growth without a sustainable economy.

As our national debt reaches $20 trillion, growing deficits are impacting young Americans. The nonpartisan Congressional Research Service (CRS) reports that the more our debt load increases, the less opportunity for economic growth. CRS warns that “deficit financing tends to crowd out greater levels of private investment” and “a growing Federal debt could place a high burden on future generations and hinder economic growth.”

Millennials may already be feeling those economic impacts. According to the U.S. Census, young Americans today are making about $2,000 less, on average, than their parents did when they were young. While pinning down the exact cause for lower wages is complicated, growing deficits and accumulated debt undeniably affect economic growth.  The debt could obliterate economic opportunities for those yet to enter the workforce if we do not address the $100 trillion in unfunded liabilities that lie ahead.

Significant gains in America’s workforce have been made over the last century and should be celebrated this Labor Day. If we want young Americans to continue to reap those gains, our country’s fiscal situation must be fixed. But if our economy collapses under the weight of unaddressed debt, future Americans will know nothing but the distant idea of the American dream, without having the means to achieve it. 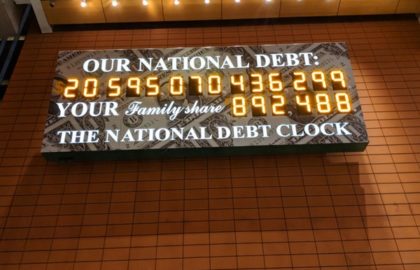