As this completely uneventful week comes to a close with absolutely nothing of significance occurring, it’s important to look back and take stock of what we may have missed.

While the Senate was busy thoughtfully spending a few billion extra on energy subsidies and “deliberating” the nearly $1 trillion food and farm welfare bill, the House was mainly focused on setting their “compromise” immigration bill on fire on the floor. That is, of course, when they weren’t passing legislation to increase the debt, jeopardize private property rights, and add over a million acres to the federal government’s property.

What’s that you say? That last one sounds important.

Well indeed it is, buckaroo! If only our elected officials could be bothered to actually debate such things instead of passing massive land-grabbing legislation by voice.

Which is precisely what happened.

In a blink-and-you’ll-miss-it moment, the House couldn’t even be bothered to cast a vote on H.R. 1791, a bill that created a massive new heritage area out in Washington state. 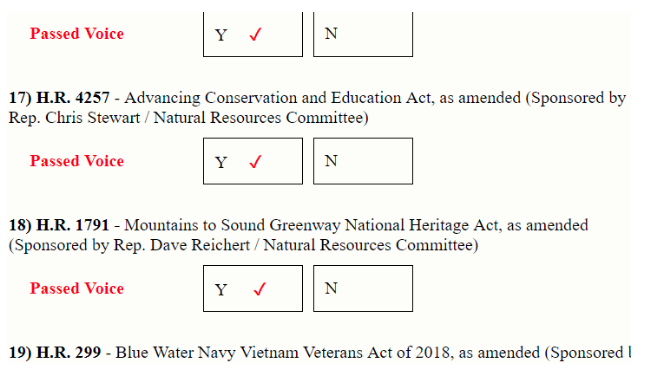 Separate from national parks, national heritage areas are distinguished by the fact that they are lived-in areas and are usually managed by state, local, or nonprofit entities—many times a collaboration of all the above, including the NPS. This presents unique complexities and challenges to administering them, especially as the National Park Service faces an increasingly insurmountable maintenance backlog.

Indeed—a 2013 report by former Senator Tom Coburn suggested that the deferred maintenance at the National Park Service was nearly $12 billion. The cost of the backlog for the entire Department of the Interior, which houses NPS, is likely much higher.

With the creation of a new national heritage area, the backlog to the National Park Service is only going to increase—to say nothing about added tax dollars required to keep these areas up. The Mountains to Sound Greenway national heritage area is estimated to include roughly 1.5 million acres in total.

The federal government already owns more than 640 million acres of land. In fact, one federal agency—the Bureau of Land Management—has more land under its control than the entire nation of France and Germany combined! Adding even more land to the federal ledger is the last thing that Congress should be doing—particularly a congress run by a party that ostensibly stands for federalism, property rights, and fiscal responsibility among other things. I know, I know. Try not to laugh too hard.

And while many millions of American families and tourists enjoy the vast swathes of beauty that America has been blessed with in our national parks each and every year (including yours truly), the fact remains that our nation’s parks are facing a steady decline in their upkeep and maintenance.

This means more money coming out of our paychecks to try to keep up with the backlog. It also means more opportunities for people living in or adjacent to these areas to have their property rights threatened. It is not at all uncommon for the management entities of national heritage areas to implement restrictive zoning and land development regulations for those in the area. These “regulatory takings” require no compensation to property owners.

And perhaps the least discussed aspect of these heritage area designations is how they’re done. The lack of transparency and statutory authorization to implement such areas is of increasing concern. In practice, the creation of heritage areas is little more than an earmark to favored constituencies in home districts.

Yes—the Puget Sound and many of the mountains in Washington state are beautiful and deserving of proper upkeep to preserve them for future generations. Just as hundreds of other places across America are as well. But creating a new government designation—with no debate—that gobbles up millions of acres of land, adds to taxpayers’ already strained wallets, and burdens an already over-burdened National Park Service is likely to make such preservation harder, not easier.