Recently, the Senate Committee on Health, Education, Labor, and Pensions (HELP) held a hearing on reducing health care costs and improving quality and value for patients. The first of many hearings the HELP committee plans to have on the subject, the witnesses ranged from medical school deans to CEOs of major health care groups.

The revelations in the hearing were shocking to say the least. One of the witnesses, Brent James, M.D. of Stanford University School Of Medicine, testified that as much as half the money spent on health care is wasted. According to James’ testimony, “Health care delivery “waste” describes any consumption of resources that does not provide optimal benefit to a patient.” He cited a 2010 Institute of Medicine study that estimated “a minimum of 30 percent, and probably over 50 percent, of all money spent on health care delivery is waste recoverable through higher quality. Some analyses suggest that waste levels may be much higher.”

“A minimum of 30 percent, and probably over 50 percent, of all money spent on health care delivery is waste recoverable through higher quality. Some analyses suggest that waste levels may be much higher.”

With health care costs expected to reach $3.6 trillion this year, that means about $1.8 trillion is recoverable waste, according to Senate testimony. What’s perhaps not surprising is the amount specifically attributed to government. “More than half of health care spending, and associated waste, is funded through government,” says James.

Diving down into what primarily causes the waste, James attributes it to “care delivery execution that still relies primarily on personal expertise and human memory…the increasing complexity of clinical practice, that “exceeds the capacity of the unaided expert mind”…[and] legal structures, cultural expectations, and payment methods.” Jeffrey R. Balser, MD, President of the Vanderbilt School of Medicine echoed Mr. James’ testimony, “The largest sources of waste are euphemistically termed “unnecessary services,” and frankly, in most other industries would be less generously labeled “sloppiness.”

The Senate HELP committee will aim to reduce rising medical costs in America through continued hearings, and then, action. But it will not be easy. As Dr. James asserted, “One person’s waste is another person’s income. Thus, health care waste vigorously defends itself – through traditional health management methods and, often, through political mechanisms.” It’s an “unregulated, wild west.”

With over a quarter of the federal budget budget devoted to health care, it is essential Congress address rising health care costs (esepcialliy in entitlements), rampant program duplication, billions of dollars lost to improper payments and fraud, and the failure to prioritize research spending. “Federal spending is expected to rise at a faster rate than the economy over the next 10 years. Add all those factors together and it is clear that the cost of health care is monumentally critical to our nation’s budget and the debt burden we are heaping on to our younger generations,” says Pursuit’s Executive Director Bryan Berky.

Health care costs are expected to skyrocket with the Baby Boomer generation retiring, and future generations will be forced to deal with this spending disease. If Congress can’t begin to stave off rising health care costs, millennials and those generations that come after will likely have to operate on Congress’s unhealthy spending habits, oversight mishaps, and disregard for the future. Hopefully, there won’t be a flat line. 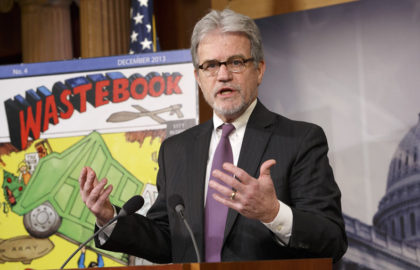 Why the Wastebook Matters