Given how bleak every federal budget update has been over the last decade, it’d be really hard to make it markedly worse.

Pause and think about the scale of our impending fiscal problems. It took the United States over 200 years to rack up $20 trillion in debt. That amount is now an adjustment to the debt forecast.

What caused this change?

CBO “substantially” increased their 30-year debt projection thanks to higher spending stemming from the budget deal that passed in August, lower revenues thanks to the repeal of the health care taxes in the spending bill in December, and lower expected economic growth.

Tally it all up, and we go from a nauseating 144 percent debt-to-GDP ratio by 2049 to an unfathomable 180 percent – far and away the largest in American history.

The underlying drivers are still the same as they were. Revenues are projected to stay close to historical norms (though that could change for the worse if Congress extends the tax breaks that are set to expire in 2025) while spending will grow to unprecedented levels – primarily due to spending on entitlement programs.

The burden bearers remain the same too. The last of the Baby Boomers will be retired by 2029. The bulk of the taxpayers over the next 30 years will consist of the largest generation in America – the millennials – and we will spend our peak earning years dealing with the shortfalls that the older generations are leaving us.

The consequences of the out-of-control debt remain the same too: 1) reduced economic growth; 2) higher interest payments (i.e. tax dollars directed towards unpaid-for spending of the past rather than investments in the present and future); and 3) heightened chances of a fiscal crisis.

There is one marked difference though. Politicians used to at least feign remorse about the dire fiscal projections and the impact it will have on their “kids and grandkids.” After the CBO report was released yesterday, there was near universal silence from our elected officials.

Maybe it’s because they think that no one is truly paying attention – least of all the millennials.

That last part has to change. And the only way it’s going to change is if young Americans hold them accountable at the ballot box.

Our future depends on it.

For an excellent breakdown of all the details of the latest CBO report, check out the Committee for a Responsible Federal Budget (CRFB) summary here. 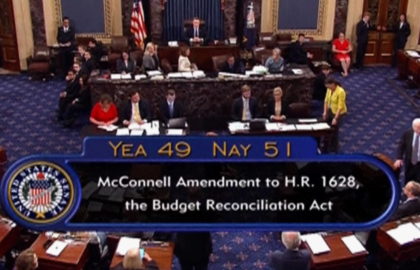 The Value of Holding Votes