Over the last week, the U.S. Treasury and the Congressional Budget Office (CBO) have released their scheduled budget updates. Given Congress’s past year of adding more spending increases and tax cuts, it will not come as a surprise that the red ink continues to gush. Just like jump cuts in a scary movie are predictable but still scary, this doesn’t make these trends any less terrifying. Let’s take a look at five scary takeaways from the reports.

Quarterly Deficit Outpaces Full-Year Deficits of the Past

CBO reported that the federal government ran a $358 billion deficit…in the last 3 months alone. That staggering figure is larger than the average ANNUAL deficits of the 2000’s (2000-2009) and is a level that was not exceeded over a 12-month period until 2003.

We Just Ran the First Trillion Dollar Deficit Since 2012

This update comes at the same time that the Treasury released its financial update finding that the federal government ran its first $1 trillion annual deficit since 2012. Following the Great Recession, the federal government ran trillion dollar deficits from 2008 through 2012 thanks to increased spending on stimulus and unemployment programs and decreased tax revenues from lower unemployment and a sagging economy. This time we are hitting $1 trillion deficits even though the economy is strong and unemployment is near historical lows.

The Deficit Is Up 50 Percent Since President Trump Took Office

The deficit has grown by 50% since President Trump took office. When challenged over the administration’s failure to make good on their promises to contain the growing deficits – Acting White House Budget Director Ross Vought lamented the fact that they can’t get cooperation from House Democrats to tackle the issue.

Which does not explain the $1.5 trillion tax cut followed by a $300 billion spending increase that that Republicans pushed through when they controlled the House, the Senate, and the White House in 2017. Nor does it explain President Trump signing another budget agreement to raise spending by $350 billion just a year after pledging never to sign a budget blowout again.

A new Committee for a Responsible Federal Budget (CRFB) analysis found that President Trump has signed legislation that will add $4.7 trillion to the debt over the next 10 years – a debt that was already projected to rise by $9.2 billion over that period.

Revenues Are Rising…But Can’t Keep Up With Spending

The problem is that spending is growing at an even faster pace (7 percent). In total, the federal government spent 7 percent ($74 billion) more over the last 3 months than it did during the same time last year.

Defense spending is up a jaw-dropping 10% – or $16 billion – and Social Security and Medicare are starting to show the impact of the Baby Boomer retirement wave – growing at 6 and 8 percent respectively.

This Will Be the Lowest Deficit for the Foreseeable Future

Thanks in large part to the demographic-driven boost to entitlement spending, our current massive deficits will seem small come 2030 when annual deficits could exceed $2 trillion annually. By 2029, every single penny that the federal government collects will be allocated towards entitlement programs and interest payments on the debt – leaving important investments like education, research, infrastructure, and defense to the hopes that the world will still be willing to finance our debts.

To get on top of the problem, $400 billion in deficit reduction is needed each and every year for the next 30 years to stabilize the debt at its already high levels. Yet, the President and want-to-be Presidents continue to propose ideas that will add even more to the deficit.

Younger Americans need someone that will step up and pay for the programs that are already on the books. Hopefully the latest reports will remind our policy leaders of that too. 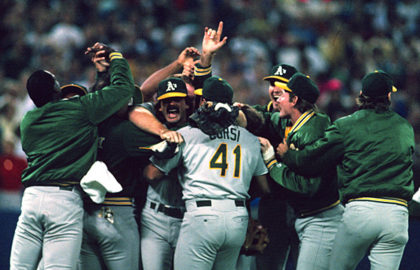 Congress Should Look to Moneyball for Help With Government Programs