Congress Trades Away Its Authority On Trade

President Donald Trump’s recent actions regarding trade have sparked a flurry of both support and condemnation from bipartisan coalitions on both sides of the debate. In reaction against the administration’s actions on trade, a letter containing 107 signatures from Republican House members was released by the House Ways and Means Committee urging President Trump to rethink his policy on tariffs.

The outcry by lawmakers has also been accompanied by public discussions on trade that gravitate mostly toward actions taken by the Executive Branch. After all, it was President Trump who unilaterally withdrew from the Trans Pacific Partnership, a multinational agreement to reduce trade barriers between signatories of the plan. The imposition of various tariffs over the past few months has also been a strictly presidential affair.

This course of events raises a natural follow-up question: Why is so much attention being paid to what the executive’s policies are on a given issue? Article I, Section 8 of the Constitution declares that Congress has the power “[to] regulate Commerce with foreign Nations,” so why are House members urging the President to take a specific course of action when they have the power to write and introduce legislation without asking permission of the Executive Branch to do so?

The current feud between some members of Congress and the President over trade is only the latest in a history of Congressional deference to the executive on the subject. The most prominent example of Congressional delegation of its authority as it applies to President Trump’s tariffs is Section 232 of the Trade Expansion Act of 1962, which the White House cited as justification for the March 2018 steel and aluminum tariffs. This section of the act states that Secretary of Commerce is able to launch an investigation into whether or not a given import may threaten U.S. national security, and the President is given the authority to adjust tariffs as a result. It is significant to note that all of this is done without the oversight of Congress.

As with a great deal of political issues, trade is another issue where Congress has gradually kicked over lawmaking to the President as a means of keeping the subject off of their list of issues to worry about. This arrangement is all well and good until concern arises from situations where members of Congress and the President are in stark opposition to each other regarding trade policy.

As with a great deal of political issues, trade is another issue where Congress has gradually kicked over lawmaking to the President as a means of keeping the subject off of their list of issues to worry about.

Offering his insight on this innate tension, President John Adams proclaimed in his Discourses on Davila that the “executive and the legislative powers are natural rivals; and if each has not an effectual control over the other, the weaker will ever be the lamb in the paws of the wolf.” The separation of powers is essential not only to ensure that each of the three branches serve as a check on the power of the other, but also to make sure that the public feels as though their government is accountable to them and not the whims of an unelected Cabinet official.

The good news is that trade seems to be offering the perfect backdrop for Congress to reassert its authority. In order to correct the history of Congressional inertia on trade, Senator Mike Lee (R-UT) underscores the point that “the ongoing public debate over the topic of trade is exactly why Congress—the most publicly accountable and deliberative branch of the federal government—should be involved” and introduced the Global Trade Accountability Act in early 2017 to ensure that all Executive Branch trade actions are subject to Congressional approval. Senator Jeff Flake (R-AZ) has similarly proposed to “immediately draft and introduce legislation to nullify these tariffs” in a further show of renewed Congressional vigor to do the work of legislating.

These actions show a hopeful sign that Congress is willing to once again perform its Constitutionally-vested role of drafting and introducing trade policies. Regardless of how one feels about the issue of trade and whether free trade or protectionism is more beneficial, all should be able to agree that Congress is tasked with writing and debating laws that, once passed, the President is then meant to implement and enforce. Any action on trade must follow the process laid out by our Founders, and Congress—the branch that is uniquely tasked with representing the people—should be the authority in writing and agreeing to laws that have such profound effects on our relationships with other nations and our economy. 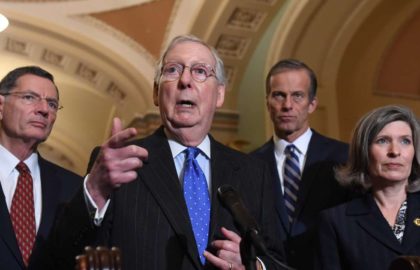