Each year, the Department of Defense issues a Future Years Defense Program (FYDP) report that outlines the long-term budget priorities for the Defense Department. The Congressional Budget Office then examines the report to analyze the impact that defense needs will have on our nation’s budget in the future.

CBO does two things in this analysis – looks to the past to expose budget gimmicks and looks to the future to see how the defense budget’s implications will be.

The Defense Department has complained that budget constraints implemented by the Budget Control Act of 2011 has affected their readiness. In fact, the two latest budget deals that increased spending by a combined $300 billion were largely due to DoD officials and the defense hawks in Congress pushing for more funding. Yet, even during the budget cap era, Congress repeatedly used end runs around the caps to boost spending over the cap – primarily through the Overseas Contingency Operations (OCO) funds.

As a reminder, when the military’s base budget was capped, the OCO, which existed to supply needed dollars to the Global War on Terrorism, was used as a slush fund for uncapped spending. In the appendix of this year’s report, CBO highlighted that “starting in 2016, the Congress began explicitly funding some of DoD’s base-budget activities with OCO appropriations to increase base-budget funding without exceeding the BCA’s caps.” Moreover, in the Administration’s budget request for Fiscal Year 2020, they asked for $98 billion for a budget item categorized as “OCO-for-base.” One report estimated that Congress designated between $20 billion and $30 billion as OCO that went towards the base defense budget.

This year marks the end of the BCA budget cap era, meaning that Congress won’t have to utilize the OCO trick to boost defense spending to their liking. Lawmakers and Pentagon officials can make the DoD base budget whatever figure they would like, as long as no new budget constraint bills are passed through Congress and signed by President Trump.

CBO also points out significant uncertainty for the future of defense spending. There are conflicting assessments for defense spending needs over the next decade based on two different plans from the administration. The first is a DoD strategy document from The National Defense Strategy Commission (NDSC) which is a congressionally mandated panel. The Commission reported that the strategy would require a 3 to 5 percent annual growth in military spending. This would lead to a DoD budget between $822 and $958 billion by 2025 growing to between $1.1 trillion and $1.5 trillion (in 2020 dollars) by 2034. If that leaves you feeling nauseous, you are not alone. There is, however, the second option.

The administration’s 2020 budget request has a more modest approach to future defense spending. Officials believe that the recent ramp up in defense spending (growth from $648 billion in 2016 to a request of $718 billion in 2020- or 3.5 percent annually) was to replenish munitions stocks and address shortcomings in readiness that was, according to them, caused by the 2011 Budget Control Act—an explanation that makes little sense, as we noted above, given the spending through the Overseas Contingency Operations fund (OCO).

Administration officials believe that the DoD can sustain on the new levels for the next decade and won’t need a sustained spending growth of 3-5 percent outlined by the NDSC. Moreover, they cite a proposed 4 percent overall spending reduction between 2020 and 2024, based on performance improvement initiatives in their business processes, as well as policy changes and system improvements to achieve savings in high-priority areas. They set a target to save $46 billion between 2018 and 2022. A goal that the DoD has failed to achieve early milestones for. 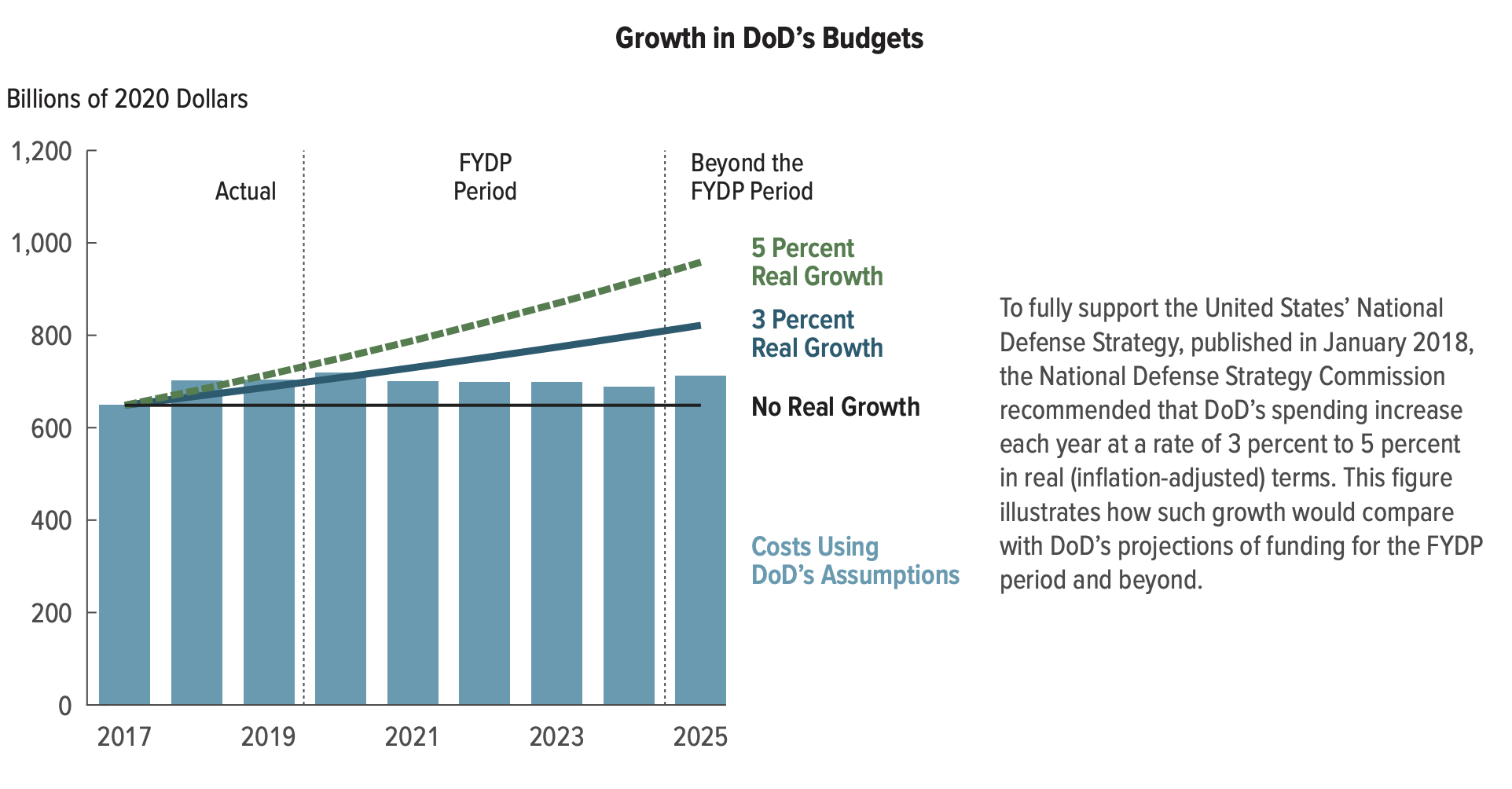 Given the history of budget chicanery to boost defense spending and a history of mismanagement at the Pentagon, the ability for Congress and the Pentagon to come together to sustain a flat budget seems like a high bar.

However, given the nation’s overall budget problems and exploding growth in the entitlement programs, young American cannot afford for runaway spending in all of the federal government’s largest programs. It’s time for leaders in Congress and the Pentagon to shape up.