Before the 116th Congress is sworn into office next year, a bipartisan group of Senators wants to make the current moratorium on congressional earmarks permanent. Ten U.S. Senators sent a letter to Senate Party Leaders Mitch McConnell (R-KY) and Chuck Schumer (D-NY) asking for the Senate to take up and pass the Earmark Elimination Act.

Senators Jeff Flake (R-AZ) and Claire McCaskill (D-MO) introduced the “Earmark Elimination Act” earlier this year after a growing call for their return in both houses. Earmarks are provisions inserted into spending bills by Congress that allocate funds to a specific project or group, sidestepping any competition or merit-based approval process.

Proponents of earmarks have been loudly voicing their opinion that “this time will be different,” with calls to make the earmark process more transparent. But history tells a different story.

In 2005, the now infamous “Bridge to Nowhere” was widely known throughout the halls of Congress as a boondoggle, yet, the Senate voted overwhelmingly in favor of the earmark. “During the debate, it was made clear that any senator who dared to vote to defund the pork project would be punished by having their own earmarks taken away,” said the letter drafted by the bipartisan group of Senators. As the letter points out, no amount of transparency will fix the inherent unfairness and corruption in the pay-to-play earmarking process.

“During the debate, it was made clear that any senator who dared to vote to defund the pork project would be punished by having their own earmarks taken away.”

The perhaps more persuasive argument is the contention that by not earmarking funds for specific projects, Congress is turning over its power of the purse to the executive branch. However, this is putting Constitution-themed lipstick on a pig. There were $700 billion in grants and cooperative agreements awarded by the federal government last year. Members have neither the capacity nor the desire to be in charge of awarding all of those funds. They only want the ability to give out gifts that benefit their careers through publicity and influence.

Nobody questions whether they can earmark under the constitution. It’s whether they should. Congress can set funding levels for projects, their purpose, and conditions for federal expenditures without picking and choosing a small selection of individual projects for their districts. This is the better way to dole out taxpayers money. No matter how much transparency you create around them, it is individual Congressmen and well-connected lobbyists picking specific projects based on politics rather than merit. Compounding the problem, in the favor factory, nobody will scrutinize others’ pork lest your pork be scrutinized back.

No matter how much transparency you create around earmarks, it is individual Congressmen and well-connected lobbyists picking specific projects based on politics rather than merit.

Proponents also say earmarks offer an easy solution to the gridlock that has plagued Congress. “From a standpoint of making the House function better and getting votes for things that are unpopular, there is no better tool than an earmark,” says lobbyist Sam Geduldig, a former House GOP leadership aide. What Mr. Geduldig, and many in Congress mean by this, is that Members of Congress bribe other Members to vote for legislation that they do not agree with – putting career before country.

When it comes to the earmark debate, the real abdication of power is rank and file members handing over their votes – and thus their constituents representation – to Congressional leadership. Vote against the team and you lose your projects. The Bridge to Nowhere debacle is a perfect example of the pay-to-play nature of earmarking that is unlikely to go away with more “transparency.”

Earmarks are a corrupt practice that should not be brought back by Congress. It is disappointing to see Congressmen using the guise of “transparency” to justify pork projects. Hopefully Congress passes the permanent earmark ban before taxpayer allies Jeff Flake and Claire McCaskill are out of office. (Flake is retiring at the end of this year, McCaskill is in a tough race in Missouri) 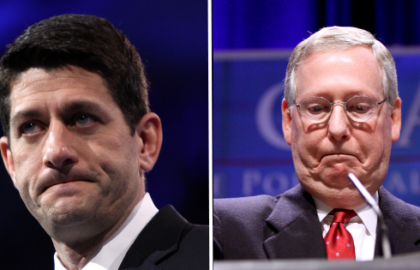